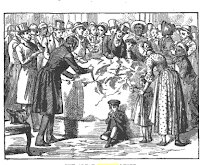 Jefferson was given a 1,600 pound cheese from Cheshire, Mass. Every farmer brought his curd to be poured into a large cider press to make the huge variegated cheese.  A large round of cheese from New York was given to President Jackson, kept in the vestibule of the White House and finally cut in 1837.  "The air was redolent with cheese, the carpet was slippery with cheese."


Jefferson's 1,600 lb. cheese
“When Jefferson was President, the agricultural town of Cheshire, in Western Massachusetts, which had been drilled by its Democratic pastor, named Leland, into the unanimous support of the Sage of Monticello, determined to present him with the biggest cheese that had ever been seen. So on a given day every cow-owner brought his quota of freshly made curd to a large ciderpress, which had been converted into a cheese-press, and in which a cheese was pressed that weighed one thousand six hundred pounds. It was brought to Washington in the following winter on a sled, under the charge of Parson Leland, and in the name of the people of Cheshire, was formally presented to President Jefferson in the then unfinished East Room. Jefferson, of course, returned thanks, and after having a great wedge cut from the cheese, to send back to the donors, he invited all present to help themselves. The cheese was variegated in appearance, owing to so many dairies having contributed the curd, but the flavor was pronounced the best ever tasted in Washington.

Jackson's 1,400 lb. cheese
Jackson's admirers thought that every honor which Jefferson had ever received should be paid him, so some of them, residing in a rural district of New York, got up, under the superintendence of a Mr. Meacham, a mammoth cheese for "Old Hickory." After having been exhibited at New York, Philadelphia, and Baltimore, it was kept for some time in the vestibule at the White House, and was finally cut at an afternoon reception on the 22d of February, 1837. For hours did a crowd of men, women, and boys hack at the cheese, many taking large hunks of it away with them. When they commenced, the cheese weighed one thousand four hundred pounds, and only a small piece was saved for the President's use. The air was redolent with cheese, the carpet was slippery with cheese, and nothing else was talked about at Washington that day. Even the scandal about the wife of the President's Secretary of War was forgotten in the tumultuous jubilation of that great occasion.

Perley's Reminiscences of Sixty Years in the National Metropolis. 1886 by Benjamin Perley Poore (1820 –1887)