On January 25, 1759 the great Robert Burns was born in the bed on the right side of the kitchen which became an ale-house and is now a museum.

Mustard and a redhot poker 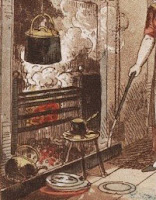 So why did the following two mustard recipes (one by the famed Alexis Soyer), use a hot fireplace poker?  The poker's heat was supposed to remove some of the 'acrimony' and water, thus making room in the mustard pot to top with a little vinegar.  Mustard made in this fashion kept well and "improves with age."

Black Monday - return to school after 12 days of Christmas holidays

What to send on the journey back to school? In this image from Georgian England it is a whole cake and apples. The days from Christmas through Twelfth Night were full of food and celebration, and no work.  Followed by Distaff Day, when women began spinning (with its distaff) flax, and the men start working until they stopped to burn the flax so the women threw water on them (image below). Now, back to crying students and Black Monday...

Instead of a bean or coin in a cake, picking a paper from a hat to decide the king, and the women selected from a reticule (or bag) for queen and other roles was a 'role playing' game for Twelfth Night celebrations.  The rules as described in Revel's Winter Evening Pastimes, 1825 and examples from the 'sheets' are shown below. Figure on left is probably a cook, from the sheet, also below. Past posts on 12th Night HERE