Red, white and blue boiled hams for the 4th of July 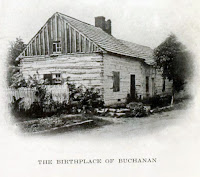 At Mercersburg, Pa., before the Civil War, the town folk and farmers would go out to President James Buchanan's birthplace and share a picnic.  One lady brought "boiled hams decorated with cloves and red, white and blue paper."

The mother of the "Mother of the American Valentine," (both named) Esther Allen Howland, wrote the small cookbook in 1844 which sold 1500 copies in it's first 15 weeks! The next year it was expanded and later the regional cookbook, with a more national name The American Economical Housekeeper and Family Receipt Book, was reprinted many times until 1875.  Receipts economical (tainted beef), medicinal (early CPR), New England (chowder in dinner-pot)...

June 18 is the 200th anniversary of the Battle of Waterloo and the defeat of Napoleon. The Duke of Wellington celebrated his victory with an annual dinner.

In the first recipe, berries were to be washed in skim milk (the milk which remained after the cream was skimmed off) "to take off any grit and sand."  Recipes for berries in cream and whipped cream Whips...