Picking the berries - "Most of the Strawberries consumed in London are grown within ten miles of it … the end of May, the women who gather the fruit, assemble in the Strawberry-garden, in the morning, as soon as it is light, which at that time of year is between three and four o'clock, and commence plucking the fruit. …taken to the packing-room and carefully put in pottle-baskets; fifty or sixty of these are placed in a large basket,"

Carrying to city - "and before seven o'clock in the morning, a number of women are despatched to the metropolis, each with one of these larger baskets, which she carries on the top of her head, with only a small cushion to make the pressure of the Weight equal over the upper surface of the head. The weight of the baskets and fruit is from thirty to forty pounds, and sometimes even more."  Saturday, 1834

The women rapidly walk, sometimes run, to the city with their 'head-loads'.  "When men occasionally carry the fruit, they have a shoulder-knot, similar to those used by porters, so that part of the weight rests on the shoulder, and part on the head, but by this mode of conveyance the fruit is generally more injured than when carried by women."  By 1834 carts with 'very pliable springs' pulled by fast horses, but again, the fruit is injured.

Pottle baskets were made by groups of women and children in their homes for six pence a dozen.  "The women prepare the wood by steeping it in water, and splitting it, according to the parts of the basket it is designed to form. Then the most skilful arrange the slips of wood, which form the upright supports of the basket, and fix them in their place by weaving the bottom part; the sides are woven by children with pliable strips of wood [fir or willow], and the top is bound over by the more accustomed workwomen." [Saturday,1834] 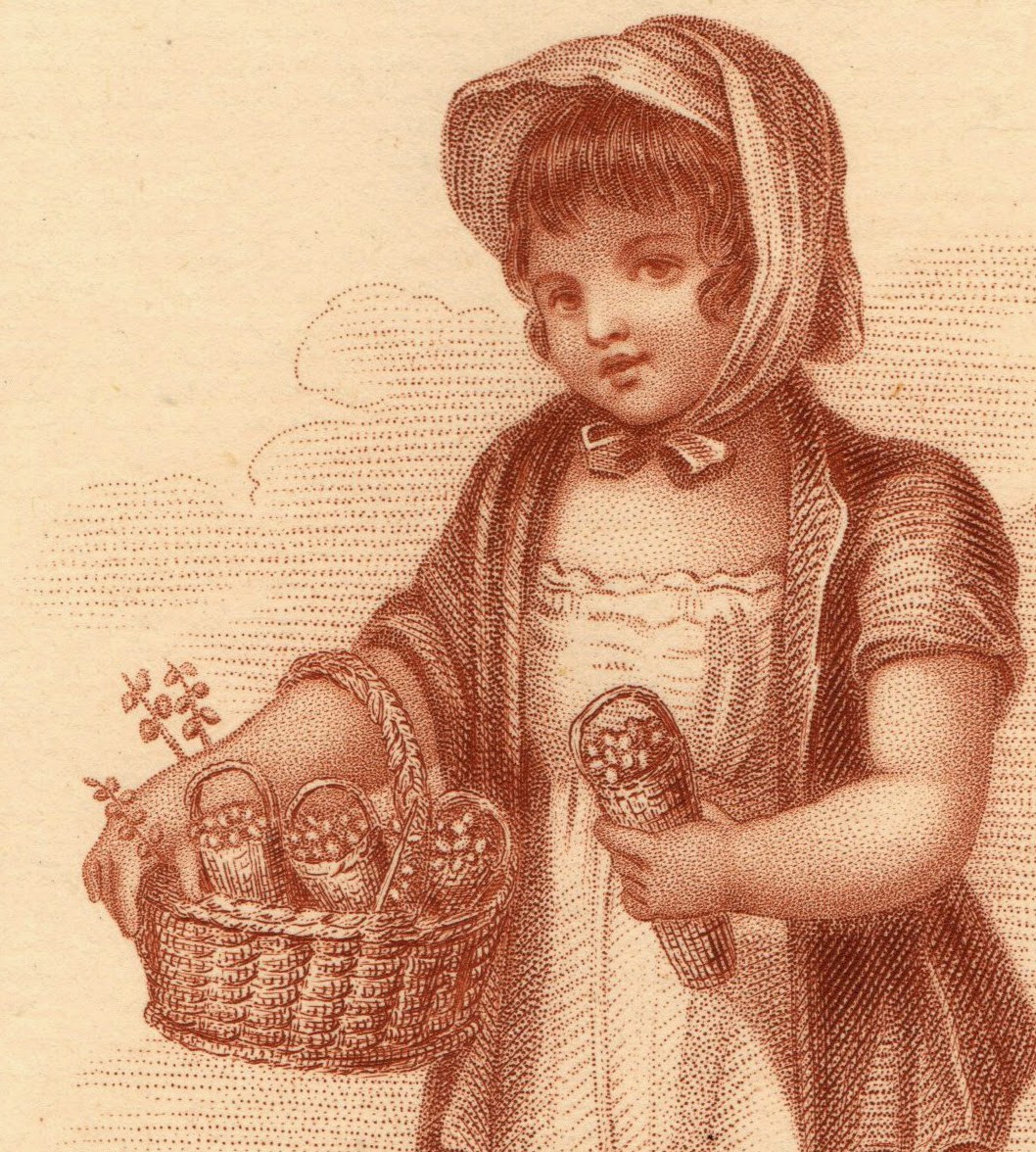 Punnet baskets or chip baskets were made and used by 1879.  "Thus, in those pre-railway days, the berries were damaged and messed about as little as possible; though common sense has since discovered that the pottle was a mistake, and that form of basket has consequently given place to the punnet.  Brentford was at that time the chef lieu of the manufacture, and hundreds of women and children were employed in the process. Both forms of baskets have to pass through several hands; the woods employed in their manufacture are deal and willow, the latter being the most esteemed."  [Gentleman's, 1879] 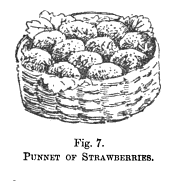 Migrant workers.  "The women employed in gathering and conveying strawberries to London, cannot be estimated at less, during the time they are in season, than two thousand persons. Part of these are the inhabitants of the adjacent towns, but a great number of them, are young women, who migrate annually from Worcestershire, Shropshire, and Wales, and after the strawberries, raspberries, currants, and goosebcrries are passed, return to the country in time to assist at the harvest..."  [Saturday, 1834]

"Brought fresh gathered to the markets in the height of their season, both morning and afternoon, they are sold in pottles containing something less than a quart each.  Great numbers of men and women are employed in crying strawberries during their season through the streets of London at sixpence per pottle."


Deposit.  "The crier adds one penny to the price of the strawberries for the pottle which if returned by her customer, she abates."  [Craig, 1804] 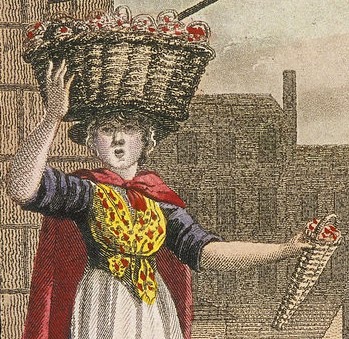 Toppers -  "were the largest sized strawberries, picked out on purpose to put on the tops of the other pottles, to make them look better than they really were." [Malta, 1841]

Covering the top "...there is the slight paper covering, the slighter rush tie, the inner covering of leaves;" [Seer, 1840]

"and when all these give place, fresh, and fragrant, and red lie the berries,—the best, it is to be feared, at the top. Now and then comes a half-mashed one, sweet in its over-ripeness; and when the fingers cannot conveniently descend further, the rest, urged by a beat on the flat end, are poured out on a plate; and perhaps agreeably surprise us with the amount."  [Seer, 1840]

"Strawberries - Strawberries and cream are charming and sweet, mix them and try how delightful to eat." [Catnach] 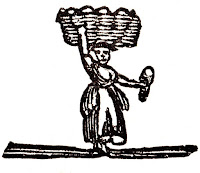 Strawberries gather'd on a fine morning,
Dear ladies only see,
And only sixpence for a pottle,
Come buy, come buy of me.   [Hindley, 1881]

"Mulberries - Mulberries, all ripe and fresh today! Only a groat a pottle – full to the bottom!" [Hindley, 1884]

Boston - "after 1800 the berries were peddled through the streets of Boston in pottles, which were small cone-shaped baskets holding about a pint, packed into square hampers holding fifty or sixty pottles.  Commercial strawberry growing began about 1812 in the vicinity of the four largest cities, Boston, New York, Philadelphia and Baltimore. The industry was necessarily confined to within a few miles of the city since the market wagon was the sole means of transportation; there were no railroads then. A man who picked two hundred baskets a day was considered a large grower. The prices received were quite attractive; in 1832 strawberries were quoted on the Faneuil Hall Market at fifty to seventy-five cents a quart."  [Proceedings, 1917]


Pottles. The measure of two quarts. It is only retained now as the name for a small conical basket of strawberries, which does not usually hold half that quantity. "Pottle-draughts," emptying a vessel holding two quarts, was a feat of topers, and in Othello, " potations pottle-deep" denote the heavy drinking which stole away the brains of Cassio and Roderigo. Towards the close of the sixteenth century the pottle was a measure for liquids in Lancashire.  [Remains]

Strawberry Jelly. Francatelli, 1846
"Pick the stalks from two pottles of scarlet strawberries, put these into a basin, and then pour one pint of clarified boiling syrup and half a pint of red currant juice on to them; cover them down with a sheet of paper, tightly twisted round the edges of the basin, and allow the infusion to stand in a cool place until it becomes cold; then, filter it through a beaver jelly bag in the usual way, and when the whole has run through perfectly bright, mix it with two ounces of clarified isinglass, and set the jelly in a mould, immersed in rough ice.
Note.—This jelly should be garnished with a pottle of fine "British Queen'' strawberries."
More on Francatelli HERE

Cherries on a stick - a previous post on selling cherries by weight or by stick. HERE

Remains, Historical and Literary… of Lancaster and Chester.  1858