Charles Elmé Francatelli (1805-1876) named his bombs for Dukes, Earls and 2 Prime Ministers (Bomb a la Robert Peel) and a couple of his first employers Lord Kinnaird and Rowland Errington (11th Baronet Stanley).  In his book Francatelli used the word 'bomb' rather than 'bombe'

More on Francatelli and Victoria HERE Season two of "Victoria" starts next week.

How to prepare a bomb -

"Freeze both compositions separately, line the mould with the pistachio ice equally of the thickness of a quarter of an inch, and fill the hollow with the vanilla cream ice." 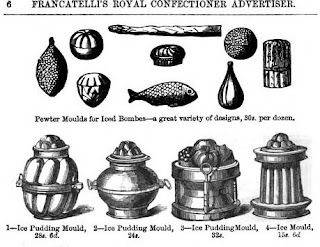 "These moulds are made in several pieces, and are fastened together with brass pins; they are of different forms and shapes, some being conical, while others are spherical; the latter being round like a bomb-shell, are most appropriate as far as their shape goes; but the fact is that bomb-ices may be, and are made, or rather moulded, in a variety of differently shaped moulds bearing no resemblance to a bomb-shell. The particular composition which chiefly characterises this kind of ice consists in its being exteriorly coated with one kind of coloured ice, while the interior is filled with a different sort and colour; for instance the rind or outer shell of the bomb should be formed with a thin coating of cherry-water ice, while the interior should consist of a vanilla cream ice.

To Mould a Bomb made of two different sorts of Ices.

"The mould having been buried in rough ice for half an hour, commence by spreading a thin coating of the fruit-water ice (say a quarter of an inch thick), equally and smoothly over the inside of the mould; and this completed, fill in the interior with the cream ice; close the mould, and imbed it in plenty of rough ice well pounded and mixed with salt.

To Mould and Freeze a Bomb-Ice.

"The simplest and easiest method for moulding" a bomb-ice is the following:—
First set up the mould in a bed of ice for at least half an hour previously to its being filled—the mould thus prepared sets the ice more quickly; commence spreading the ice up—and all over the sides of the mould, in order to fill in any existing cavities formed by the design of the mould, as would be the case when usingja pine-apple or melon mould, for instance; when the inside coating is complete, fill the interior with the remainder of the ice, and imbed the mould in plenty of rough ice, and cover a wet cloth over the tub.

Another method for Moulding Bomb-Ices.

"When it happens that plain moulds are used for this purpose, such as high-dome or fiat-topped moulds without any design or cavities, they should be lined with thin pliant white paper in the following manner :—

First cut a circular piece of paper the size of a large or small plate or saucer, according to the capacity of the mould, and press this round piece of paper upon the rounded part of the mould, so as to give it a saucer-like shape; this will then fit closely into the bottom of the mould; a broad band of paper cut to the depth of the mould will serve to line the sides. The mould thus prepared previously to filling in the ice, facilitates the delivery of the bomb.

When about to turn out or unmould the bomb, a long knife should be carefully passed all round in between the ice and the sides of the mould, to free and loosen any adhering portion; the bomb will then easily deliver by turning the mould upside down with a sudden jerk of the wrists; when dished up the papers must of course be removed.

How to remove the Ices from the moulds.

Spread a clean cloth on the slab, cover it with slips of pliant paper measuring about four inches long by two-and-a-half inches wide; have ready also two pans, one containing cold water to wash the moulds in, the other slightly tepid water to dip them in for the purpose of facilitating the delivery of the ices; as these are removed from the moulds, they should be dished up and immediately sent to table if required for present use; but in the event of the ices being intended to be served at a later period, each ice is to be wrapped up in one of the strips of paper, and put in rows on the shelves of the ice-cave (see Adams' Illustrations), and when the cave is filled, the latter must be entirely imbedded in ice and salt in a large tub; the ices thus managed when the time arrives to serve them, will be in all desirable perfection."  The Royal English and Foreign Confectioner, 1862.