The Baltimore connection. In 1801, newly elected Thomas Jefferson (1743-1826) wanted the formerly enslaved (freed in 1796) James Hemings (1765-1801) as his presidential chef but Hemings wanted Jefferson to contact him personally and said he was busy with an engagement with Mr. Peck, a "Tavern Keeper" in Baltimore. William Evans, the owner of the nearby larger Indian Queen, was the go-between for Jefferson and Hemings.

James Hemings had accompanied Jefferson to France (1784-1789) where he took lessons from a French chef then cooked for Jefferson there, and then at Philadelphia (the temporary capital, TJ Secretary of State). When they left in 1793, Jefferson signed an agreement HERE that Hemings would be free after teaching his replacement at Monticello.

Once on his own, Hemings worked at various locations, the latest was in Baltimore for Heil (Henry) Peck at the Columbian inn at 237 Baltimore Street. Peck had joined the Continental Army in Connecticut then moved to operate various inns. He sold an inn on York Road. Two years after Hemings worked for him, he sold the Columbian Inn in 1803 and moved to Fels Point section of Baltimore, which he sold three years later, and moved to the Coffee-House Hotel on South St. By 1812 he owned "Heil Peck's Tavern" in Ellicott City, Md then moved on. He died before 1843 when his widow Hannah applied for his pension.

A description from 1802 -
Columbian Inn, No. 237, corner of Baltimore & Howard-streets
The tavern “…has the advantage of a high situation, a good garden, excellent water, and a free circulation of air, which render it not only agreeable but healthy. In the garden are [? ] warm, cold and shower baths, where constant attendance will be given during the season for bathing. The garden will be lighted every evening, where will be ice creams, [relishes] coffee, &c served up on the shortest notice. Henry Peck."
On St. Patrick's Day 1803 a ball was held by the Irish residents. Also that year, a mail-stage was started from Hagerstown, stopping in Frederick and ending at the Columbian Inn. 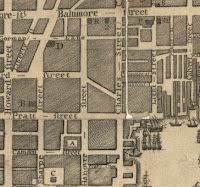 William Evans, the owner of the prominant Indian Queen hotel at 187 Baltimore and Hanover streets, on the same street as Peck's Columbian Inn, had told Jefferson he sometimes saw Hemings, so TJ asked Evans to contact him. Hemings told Evans that he had an engagement with Peck that was "out of his power to relinquish for a few days" but would let him know "in the course of the evening." When he did not show, Evans contacted him again. Hemings said he wanted Jefferson to contact him directly.

Jefferson wrote to Evans: "I supposed I saw in the difficulties raised by James an unwillingness to come here, arising wholly from some attachment he had formed at Baltimore; for I cannot suspect an indisposition towards me. I concluded at once therefore not to urge him against inclination, and wrote to Philadelphia." That summer James did go down to Monticello for a few weeks as a chef and was paid.

The new President wanted French food served in his White House, and once again wrote to someone for help. Philippe André Joseph de Létombe, the French Consul in Philadelphia was asked to find someone for the Maitre d’Hotel position HERE; then in March for a cook HERE. A Frenchman, Honore Julien (1760–1830), who a had worked for the wealthy William Bingham in Philadelphia, then for President Washington, became Jefferson's White House chef for eight years.

The following excerpts from letters (online at Library of Congress) discuss the attempts to have James Hemings be the White House chef, and the last letters about his tragic early death by suicide, possibly as a result of drinking.  The image shows his marvelous handwriting in a kitchen inventory.

White House chef discussion --
~TJ to William Evans. Feb 22, 1801 HERE
You mentioned to me in conversation here that you sometimes saw my former servant James, & that he made his engagements such as to keep himself always free to come to me. could I get the favor of you to send for him & to tell him I shall be glad to recieve him as soon as he can come to me?

~Evans to TJ. Feb 27, 1801 HERE :
… your former Servant James I Immediately communicated to him, he told that he was under an engagement with Mr Peck, a Tavern Keeper, of this place, which he said was out of his power to relinquish for a few days, I requested him to be particular In mentioning the time he could be in readiness to go you, he gave me for answer that he would make up his mind in the course of the evening and let me Know his determinations, but on finding that he did not call agreeable to promise I sent for him a second time, the answer he returned me, was, that he would not go untill you should write to himself…

~TJ to Evans. Mar 31, 1801 HERE :
I supposed I saw in the difficulties raised by James an unwillingness to come here, arising wholly from some attachment he had formed at Baltimore; for I cannot suspect an indisposition towards me. I concluded at once therefore not to urge him against inclination, and wrote to Philadelphia, where I have been successful in getting a cook [Honore Julien] equal to my wishes. I am glad Francis [Say/Sayes, former employee who he did not want to rehire so he asked Evans to talk with him] remains there, as I cannot bear a servant who drinks, & on the whole am supplied to mind. I would wish James to understand that it was in acquiesance to what I supposed his own wish that I did not repeat my application, after having so long rested on the expectation of having him.

Death --
~TJ to Evans Nov 1, 1801 HERE :
a report has come here through some connection of one of my servants that James Hemings my former cook has committed an act of suicide. as this whether true or founded will give uneasiness to his friends, will you be so good as to ascertain the truth & communicate it to me.

~Evans to TJ. Nov 5, 1801 HERE :
I received your favour of the 1st Instant, and am sorry to inform you that the report respecting James Hennings Having commited an act of Suicide is true. I made every enquiry at the time this melancholy circumstance took place, the result of which was, that he had been delirious for Some days previous to his having commited the act, and it was the General opinion that drinking too freely was the cause.

~TJ to Thomas Mann Randolph. Dec 4, 1801[son-in-law] HERE
in a letter [now missing] by that post to mr Dinsmore I gave him an account of the tragical end of James Hemmings.

Andrew McLaughlin (nephew of Gadsby and son-in-law of Barnum) worked at the Indian Queen, owned a hotel in Ellicott mills (now Ellicott City) then sold it and other buildings to be part owner of Barnum’s Hotel in Baltimore. HERE