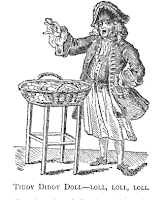 The flamboyant seller of gingerbread was "hailed as the King of itinerant tradesmen."  Dressing "like a person of rank" the tall Ford (his real name) wore gold lace, white stockings and a white apron.  He would harangue the audience at "fairs, mob meetings, Lord Mayor's shows, public executions" and holiday festivities; and include in his 'cries' Tiddy tiddy dol.


From a history of Cries of London book -

"This celebrated vendor of gingerbread, from his eccentricity of character, and extensive dealings in his particular way, was always hailed as the King of itinerant tradesmen. He was a constant attendant in the crowd at all metropolitan fairs, mob meetings. Lord Mayor's shows, public, executions, and all other holiday and festive gatherings!

In his person he was tall, well made, and his features handsome. He affected to dress like a person of rank; white and gold lace suit of clothes, lace ruffled shirt, laced hat and feather, white stockings, with the addition of a white apron. Among his harangues to gain customers, take the following piece as a fair sample of the whole :—

"Mary, Mary, where are you now Mary? I live, when at home, at the second house in Litttle diddy-ball-street, two steps under ground, with a wiscum, riscum, and a why-not. Walk in, ladies and gentlemen; my shop is on the second-floor backwards, with a brass knocker on the door, and steel steps before it. Here is your nice gingerbread, it will melt in your mouth like a red-hot brickbat, and rumble in your inside like Punch and his wheelbarrow."

He always finished his address by singing this fag end of some popular ballad :—

Hence arose his nickname "Tiddy-Doll." In Hogarth's print of the "Idle 'Prentice Executed At Tyburn." Tiddy-Doll is seen holding up a gingerbread cake with his left hand, his right hand within his coat, to imply that he is speaking the truth from his heart, while describing the superiority of his wares over those of any other vendor in the fair! while he still anxiously enquires :—

"Mary, Mary, where are you now Mary?"

His proper name was Ford, and so well known was he that, on his once being missed for a week from his usual stand in the Haymarket, on the occason of a visit which he paid to a country fair, a ''Catch-penny" account of his alleged murder was printed, and sold in the streets by thousands.

Allusions to Tiddy-Doll, and sayings derived from him have reached to our own time, thus, we still say to an over-dressed person— "You are as tawdry as Diddy-doll," "You are quite Tiddy-doll, you look as fine as Tiddy-doll," he or she is said to be "all Tiddy-doll," &c.
Hindley, Charles.  A History of the Cries of London: Ancient and Modern.  London: 1881 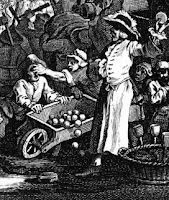 "A boy... is earnestly watching the motions of a vender of gingerbread, at that time well known by the name of Tiddy-Doll, from the burthen of the song he usually sang in commendation of his cakes."
The Works of William Hogarth.  London: 1812

“Tiddy-Doll, the great French gingerbread-baker [Napoleon]; drawing out a new batch of kings - his man, Hopping Talley [Talleyrand], mixing up the dough”  by James Gillray 1806 in the Library of Congress online print collection.

The Cries of London, for the Instruction and amusement of good children.  Decorated with wood-cuts from life.  York: J. Kendrew, c1820? 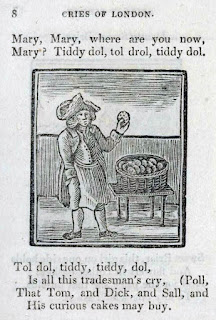