Mary Randolph Randolph was a distant cousin of Thomas Jefferson, as was her husband; and her brother married Jefferson's daughter.  There were other connections, and several false stories...

Three weeks before Easter, in the middle of Lent, was Mothering Sunday, Mid-Lent Sunday or in Bury, England - Simnel Sunday. Simnel Cake (boiled then baked), Mothering Buns, Furmity and lamb.

Olio was an extravagant stew of many meats, vegetables, herbs and spices served in it's own "close-covered" cooking "olio pot."   Vincent La Chapelle, "Chief Cook" to the Earl of Chesterfield, included three recipes in his 1733 work The Modern Cook - one French Olio and two Spanish.  By the 1860s a Crab Olio was in two Maryland cookbooks - no meat, but crab, eggplant and tomatoes. 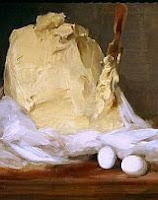 Although there are many images of chicken ladders in Germany, HERE I haven’t seen a chicken ladder going into a tree...until recently.  The photo was taken the first two decades of the 1900s on a farm in southern Monroe County, Pa.  In the few writings about the pros and cons of chickens in trees, only one mentioned to "place something" for the chickens to get to the branches.

Without a steady means of refrigeration, butter could be bitter in the winter if (according to 18th and 19th century sources) ... the milk froze then thawed, the cream was not skimmed off the milk in time, uneven turning of the barrel churn... or if the cattle ate ash tree leaves at "Michaelmas time" (Sept. 29). 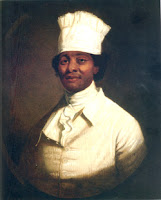 Five years ago I did a post on this gifted slave who escaped to freedom on Washington's birthday and was never found.  Well, now he has been found, but his image is lost.  The striking portrait by Gilbert Stuart was not of Hercules nor by Stuart.  The "toque" was actually a West Indian headdress. Hercules lived and was buried in New York City and he has dates! 1748-1812

Instead of a Twelfth Night Cake, waffles were among the holiday's foods in the 17th century, painted by Jan Steen (1626-1679). Click on picture to enlarge