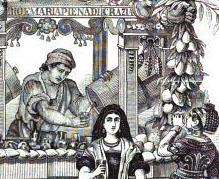 This image, from 1840, shows one of the flamboyant stands in Naples which "look much like the shrines of the Madonna in other Italian cities."  The stands sold "orangeade and lemonade mixed with snow." Complete image, below.

"The stranger may stop and drink, with relish and refreshment, the orangeade and lemonade mixed with snow, and sold at the little booths on the street-corners. 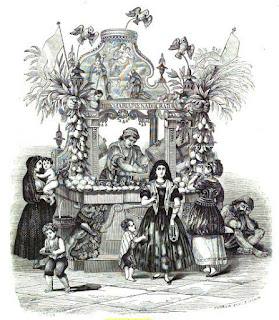 These stands look much like the shrines of the Madonna in other Italian cities, and a friend of ours was led, before looking carefully into their office, to argue immense Neapolitan piety from the frequency of their ecclesiastical architecture. 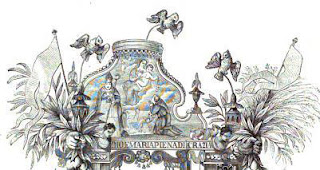 They are, indeed, the shrines of a god much worshiped during the long Neapolitan summers;

and it was the profound theory of the Bourbon kings of Naples, that, if they kept their subjects well supplied with snow to cool their drink, there was no fear of revolution. It shows how liable statesmen are to err, that, after all, the Neapolitans rose, drove out the Bourbons, and welcomed Garibaldi."

A recent post on snow stored in mountain caves for use in Naples HERE
Other posts on Naples (macaroni, ice cream, cakes, olives)  HERE