Mary Randolph Randolph was a distant cousin of Thomas Jefferson, as was her husband; and her brother married Jefferson's daughter.  There were other connections, and several false stories...

3. Thomas Jefferson, as the first Secretary of State under President George Washington, offered the job of US Marshall in Virginia to Mary's husband David.  On Oct 6, 1791 inquiring if he would be interested in the position of Marshal for Virginia.

“If you authorize me to say so to the President, the appointment will be given to you. It’s duties are as yet scarcely sketched out, by the federal legislature. By turning to the act of the first session of Congress, chap. 20. sect. 27. &c. you will see what has been prescribed and provided for that officer”

According to the US Marshals Service website, David was appointed three weeks later (Oct 27) and approved by the Senate on Nov 7.  Four years later 1795, and again in 1799 he was approved by the Senate.  Then Virginia was divided into the Eastern and Western districts in an Act of Feb 13, 1801 (Jefferson become President March 4) with Randolph as Eastern.  On March 23, 1801 Joseph Scott replaced him and Randolph was Vice Marshal until removed. Thomas Jefferson is blamed for Randolph loosing his job because his disagreed with his politics, and so they lost that income and Mary was forced to open a boarding house.  It is more complicated.  They spent money, perhaps unwisely, and there was more to his firing.

4. Mary sent a copy of her cookbook to Jefferson, and he sent a thank you note.


Washington March 17, 1825
Will you permit me my dear Sir to offer a copy of a book which my necessities compelled me to publish, and which I shall be much gratified to know meets with your approbation.   With sincere wishes for the continuance of your health receive the venerating esteem of
M Randolph 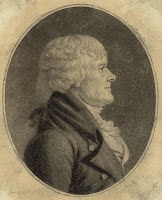 Monticello Mar. 30, 1825
Th Jefferson returns his thanks to mrs Randolph for the valuable little volume she has been so kind as to send him. it is one of those which contribute most to the innocent enjoyments of mankind, and which give us the useful instructn how to employ to our greatest gratification the means we may possess, great or small. a greater degree of merit few classes of books can claim. with his thanks he prays her to accept the assurance of his high respect and esteem.
[ Founders documents, National Archives]

5. 1793 letter from Jefferson to David including his regards to Mary:

6.  Jefferson's daughter Martha married Mary Randolph's brother Gov Thomas Mann Randolph, Jr. Their son, Thomas Jefferson Randolph (1792-1875), stayed at the boarding house in 1809 when her husband was in England and filled so he had to share a room.


Richmond 13th Novr 1809
…T.J. Randolph,…I soon discovered that Jefferson was anxious to remain at his Aunts, where he had been from the time of his arrival—and that she likewise wish’d him to board with her. He said after I had been to Mrs Pages, (which he had before forgotten) that his Father wish’d him to board with his Aunt, provided she could furnish him with a room: but this it seems she cannot do, & can only give him a part of one with a young Gentleman now boarding there.—He appeared to be so very anxious that I should not place him elsewhere until he could hear from home, that I could not have done it, even could I have found an eligible situation for him: which however I find to be much more difficult than I apprehended.
A Mrs Starke will furnish him with a room after the Session of the legislature…Geo. Jefferson

About this time the younger Randolph wrote his mother from his aunt’s house that he had “waited with impatience for nearly a month expecting to hear from some one of the family (yourself excepted) respecting my final arrangements for the winter; The house is very much crowded at present, but we experience no inconvenience from it, having a room in another, I never see or hear the company except at meals … I am perfectly satisfyed with my situation”
(Thomas Jefferson Randolph to Martha Jefferson Randolph, [1809], ViU: Edgehill-Randolph Papers).

7.  Many of Mary's siblings were financially troubled, and as Jefferson's farm manager Edmund Bacon called Dr. John and Gov Thomas Randolph "was one of the most eccentric men that ever lived, and I think Gov. Randolph was full out as strange a man as he..." More on all her siblings in past post HERE

8.  David and Mary were very vocal in opinions.  Blennerhassett recalled that "she certainly uttered more treason than my wife ever dreamed of...”

Richmond 17th October 1815
The ruin of my family and the consequent wretchedness of my declining years, produced by an exercise of arbitrary power in your hands, together with the active malignity of certain advocates of your infallibility, shoud have been born with consistent resignation, were it not that an unoffending hapless offspring are likely to be deprived of their only inheritance,—their fathers unsullied reputation. Hence Sir, I take leave, in the unfeigned spirit of affectionate regard for former recollections and family intimacies, to apprise you of my intention (in due season) to effect an issue between us through the medium of the public press. Mindful of the maxim “that no man’s character is the better for handling”; and, at the same time, the exalted station you equivocally hold in the community, I am equally sensible, that monstruous fame like the monstruous mamoth, when tainted, will generate greater nausea than simple report, or, the putrescence of a Dormouse—And, however impervious to the shafts of Truth, you may conceive your party-panoply of fraud and faction to be, yet will I not shrink from any process of fact and reason, however tortuous, or doubt of a favorable issue to my purpose. Order upon this forced-occasion, is especially requisite to my conclusions. You therefore Sir, will be pleased to recall the factitious Scenes open’d by the Secretary of State to the Marshal of Virginia: the peculiar favour, and the insidious conversations advanced in August 1793, as well in your Cabinet, as at your Country residence: when from distinguished privileges granted the Marshal, and the fervid observations addressed to him, the most profound respect was converted into jealous indignation! When the Secretary of the Treasury, more particularly, furnished the fertile topicts of the most unworthy animadversions: when characters of minor consideration, and, even the president too, were introduced as the prescious objects, on whom to lavish your illiberal innuendos, even to the excitement of congenial responses from the other four chosen members of your festive board on the banks of the Schiulkill. There it is Sir, I wou’d fain stimulate your reminiscence. And, whilst no one more truely laments the death of my personal and esteemed friend Dr Rush than myself, or, can be more indifferent to the fame of the deceased Governor of Tennessee, I wou’d, with every degree of justice to the honorable characters of Pierce Butler Esqur. (and, I believe) Colo. Thos Blount, challenge your appeal to their memories for the correctness of these few hints, to shew the source of those details, among others, which I shall hereafter unfold. And, believe me Sir, I woud “nothing extenuate, or set down aught in malice,” in the progress of an odious task imposed on me as an indispensable duty.
I beg leave to assure you more over, that this communication will remain wholly unknown to others, until the final result of a similar Affair at Law, instituted for an equally necessary purpose.
I am Sir, with appropriate Sensibility,
Your Huml Sert
D M Randolph

Past posts on Randolph HERE and Jefferson HERE

Images are by Saint-Mémin, Charles Balthazar Julien Fevret de, 1770-1852, from the Library of Congress