Jules Gouffe (1807-1877) was born to a Parisian patisserie (pastry shop) owner and spent seven years with the great Careme.  In his 1869 cookbook he tried to popularize the lighter Iced Froths served in jelly glasses.  They were "superior to either Ices or Sorbets" during "this transition period" and thus "improve the indifferent quality of the refreshments now served at evening parties." The frothing stick and sieve were needed to make his 5 flavors: Chocolate, Coffee, Strawberry, Maraschino and Almond Milk.

"Before giving the several recipes for these Iced Froths, I will give a list of the utensils required for their preparation.

First. A frothing-stick: this is a boxwood mallet-shaped instrument about a foot long (vide woodcut); the head is hollowed out into ridges, to produce the froth quicker and in greater abundance; the handle is cut to an octagonal shape, so that it may be twirled with greater ease between the hands.  This frothing-stick can be obtained at all respectable turners.  [click images to enlarge]

Fourthly. A tinned copper skimmer.
Fifthly. A large knife, to detach the froth from skimmer.
Sixthly. A copper freezing-case.

Although this kind of ice is seldom served, I have thought it best to describe it; it is just possible that, in this transition period, we may see an attempt made to improve the indifferent quality of the refreshments now served at evening parties; and then such delicate preparations as these Iced Froths will be in request;

I consider these froths, on account of their lightness, superior to either Ices or Sorbets; They are cool to eat, without freezing the palate, and do not increase thirst instead of slaking it, as so many sweetened drinks do.  Finally, they have the advantage of being perfectly wholesome and suited to the weakest digestion. 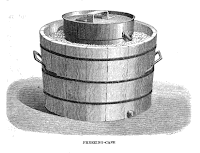 Stir the chocolate over the fire until it is melted; boil for ten minutes, and strain the whole through a silk sieve into a large basin;

Allow the chocolate to cool for several hours and add 1 pint of double cream;

Place a draining-sieve on another basin;

Begin frothing the chocolate with the stick; whisk it at the edge of the basin rather than in the middle;

When the froth thickens, and its bubbles are small and close together, take it off with the skimmer, and put it on the sieve to drain;

Continue whisking until all the chocolate, even that which has dripped through the sieve, is converted into froth;

When thoroughly drained, heap the froth lightly into jelly-glasses;

Place the glasses in a freezing-case previously set in rough ice and bay salt; close the case, and let the glasses remain therein until wanted.

The preparation of the Iced Froth requires some practice ;

The sieve containing the froth must not be shaken ; the glasses must be filled properly without pressing the froth down, as its lightness is its principal attraction.

A stick of vanilla or a little vanilla sugar may be boiled with the chocolate.

Strain the whole through a silk sieve, and whisk and finish the froth as directed in the preceding recipe.

Strain the whole through a silk sieve into a basin, and finish the froth as directed for Chocolate Iced Froth.

Mix in a basin:
1 quart of double cream,
1/2 pint of Maraschino,
1/2 lb. of pounded sugar
Strain and finish the froth as directed for Chocolate Iced Froth.

Blanch and peel 1/4 lb. of Jordan almonds and 2 oz. of bitter almonds;
Pound the almonds in a mortar, adding 3 gills of water whilst pounding; press the almonds through a coarse broth napkin, previously washed in boiling water and rinsed in cold water;
Put the almond milk in a basin, with:
1 quart of double cream,
3/4 lb. of pounded sugar
Mix, and strain the whole through a silk sieve into a basin, and whisk and finish the froth as described for Chocolate Iced Froth.
Observation.--Should the preparations not froth easily, add a little more cream.