Robert Seymour (c1800-1836) drew a series of humorous sketches (including several on pic-nics) from 1834-1836.  Picnic problems included being "cow'd," a no trespassing type sign on the riverbank, and items in the picnic basket shifting and breaking.

"Unpacking for a Pic-nic.
Oh! dear here's the sherry and mixed pickles broke! O yes, and they have broke into pastry too.


A Merry holiday party, forming a tolerable boat-load, and well provided with baskets of provisions, were rowing along the beautiful and picturesque banks that fringe the river's side near Twickenham, eagerly looking out for a spot where they might enjoy their " pic-nic " to perfection.—


"Oh uncle, there's a romantic glade ;—do let us land there "— exclaimed a beautiful girl of eighteen summers, to a respectable old gentleman in a broad-brimmed beaver and spectacles.
"Just the thing, I declare," replied he—"the very spot—pull away, my lads—but dear me " continued he, as they neared the intended landing-place, " What have we here? What says the board?"
"Parties are not allowed to land and dine here "—
"Oh! oh! very well; then we'll only land here, and dine a little further on "— ... 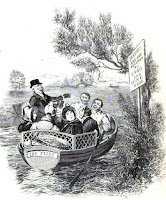 THE PIC-NIC.
No. II.
Notwithstanding the proverbial variety of the climate, there is no nation under the sun so fond of Pic-Nic parties as the English; and yet how seldom are their pleasant dreams of rural repasts in the open air fated to be realised!
However snugly they may pack the materials for the feast, the pack generally gets shuffled in the carriage, and consequently their promised pleasure proves anything but "without mixture without measure."

The jam tarts are brought to light, and are found to have got a little jam too much. The bottles are "cracked " before their time, and the liberal supplies of pale sherry and old port are turned into a,—little current.
They turn out their jar of ghirkins and find them "mixed" and all their store in a sad pickle.
The leg of mutton is the only thing that has stood in the general melie.
The plates are all dished, and the dishes only fit for a lunatic asylum, being all literally "cracked."
Even the knives and forks are found to ride "rusty" on the occasion. The bread is become sop; and they have not even the satisfaction of getting salt to their "porridge," for that is dissolved into "briny tears."
Like the provisions, they find themselves uncomfortably "hamper'd'" for they generally chuse such a very retired spot, that there is nothing to be had for love or money in the neighbourhood, for all the shops are as distant as—ninety-ninth cousins.
However delightful the scenery may be, it is counterbalanced by the prospect of starvation.

"Talking of Pic-nics," said Mr. Timmis, "reminds me of one that was held the other day in a meadow, on the banks of the Lea. The party, consisting of ladies only, and a little boy, had just spread out their prog on a clean table-cloth, when they were alarmed by the approach of a cow. They were presently on their pins, (cow'd, of course), and sheered off to a respectful distance, while the cow walked leisurely over the table-cloth, smelling the materials of the feast, and popped her cloven foot plump into a currant and raspberry pie! and they had a precious deal of trouble to draw her off; for, as Tom Davis said, there were some veal-patties there, which were, no doubt, made out of one of her calves; and in her maternal solicitude, she completely demolished the plates and dishes, leaving the affrighted party nothing more than the broken victuals."