The fluffy, yeast cake topped with peaches existed by 1910 when it was mentioned in a poem by a Baltimore Sun writer.  It was and is sold in Baltimore bakeries during peach season.  Recently, marmalade is spread over the cake as a glaze. Maryland cookbook author Elizabeth Ellicott Lea's 1846 marmalade recipe is easy and delicious.

Over the years the Baltimore Sun  has had many articles on the Baltimore Peach Cake. Search the  archives for recipes and info.  Baltimore Sun Aug 10, 2016  has a nice recipe (which I used) and history. HERE  Search 'images' online for better examples.

My cake was baked in two old low-sided 8x8" pans (so thinner) and topped with thin slices of peaches.  Spread with Lea's marmalade when the cake was still hot.

Maryland and the surrounding states grew and shipped a lot of peaches. The picture is from Harper's Weekly 1878 article on the Delaware peach trade  more here.  Maryland cookbook author Jane (Mrs. BC) Howard's nephew John Eager Howard III had 1,000 peach and apple trees at his country home west of Baltimore in the 1850s. 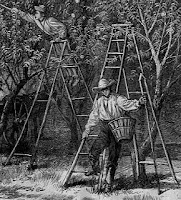 1910 poem excerpt by Folger McKinsey in Baltimore Sun -
"A union of the nectral
Of peach with spice and sweet
...
But when you want both food and wine
Just let the peachcake speak!"

Peach Marmalade   Lea  1851
Take soft yellow peaches, pare them, and cut them in quarters; give them their weight in sugar; put the peaches in the preserving kettle with a pint of water, without the sugar, and let them boil till they are well cooked, covered over with a plate; when done, mash them in the kettle till very fine, and stir in the sugar; let them cook slowly an hour, or they may be finished in a stone jar in the oven,or set in a stove boiler, and the water kept boiling all the time; they are not then so likely to burn as when finished over the fire; they will do with less sugar, if they are dried in the sun two days previous to preserving.

Modern notes - for a small (2 cup) batch take 3 large yellow peaches (1 lb), peel and quarter.  Boil in 1 cup or so of water until tender.  Roughly breakup the peaches in the water (I kept chunky, Lea 'very fine'); add 1 lb sugar and put on low heat (will still boil) for an hour until thickens and the syrup does the old 'clings to spoon'.

Past posts on peaches HERE