Niagara's International Hotel waiters marched and served to music in 1860

To feed the hundreds of guests, the waiters marched to the band's music: "Norma" to lay down the place settings; a march to enter; piscicato for fish, and removed the covers to "a crash of trombones, cymbals and gongs."

The International Hotel was built in Niagara Falls, on the American side, in 1853 by BF Childs. By the 1890s (image from 1895) it could hold 600 guests.  President McKinley ate lunch there in 1908 before he was shot in Buffalo, NY.  The hotel burned down ten years later. 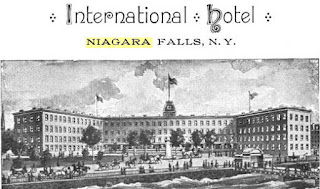 1860
"A few words about the International Hotel, and then I must reluctantly bid adieu to Niagara. This hotel is a most stupendous as well as an elegant structure, containing every comfort, a capitally served table loaded with the most recherche' dishes;

but the most remarkable thing in the establishment is the excellent manner in which the waiters are drilled; no confusion, but marching in and out with dishes in double files like soldiers, to the music of a band stationed in an orchestra in the upper end of the magnificent dining saloon.

One peculiar feature is the manner in which the plates, &c., are placed upon the tables; four waiters at each place themselves in a row, one having plates, another knives, the third forks, and the fourth spoons; at the ringing of the conductor’s bell, the band strikes up the march in “Norma ;” [Bellini's 1831 opera] the waiters march round the tables keeping time to the music, their arms all going together, the four at the same moment depositing on the tables the articles they carry: it is really astonishing how quietly and orderly everything proceeds owing to this excellent system. After an early dinner and the settlement of our bills (charge 10:. 6d. per day board)…"
Wallace, William.  The Great Eastern's Log. Containing Her First Transatlantic Voyage ...  London: 1860


1861
"But when you go to Niagara, dine once, if never more, at the International Hotel. It is on a scale to match Niagara. The drawing-room is a gorgeous immensity of plate-glass, gilding, and upholstery. You walk over a prairie of carpeting.

But the dining-room gives the best idea of infinite space, infinite eating, infinite clatter. A vast regiment of negro waiters parade, march, counter-march, and go through a series of distracting evolutions, to the music of a full band playing in an alcove.

There is a march for them to enter; a three-four movement for soup; a piscicato passage for fish; the covers come off to a crash of trombones, cymbals, and gongs; and so the whole dinner goes off to appropriate music, with an accompaniment of champagne corks like the firing of skirmishers.

Altogether, it is a tremendous affair, even to an American, used to taking his dinner with a few hundred people about him. I can imagine what it must be to an Englishman. The expense of such dinner, with a bill of fare that would fill four of my pages, is three, or perhaps four, shillings—but the wines are extra. An American, who means to do the thing handsomely, takes champagne. No other wine is worth his drinking. An English lady, wishing to give an idea of an American she met in Montreal, described him as “the sort of man who would take champagne with his soup!”