Ending this Ice Cream Month with a late 19th century cookbook with wonderful descriptions of types of ice creams and molds.  Bombs, introduced by Francatelli (more HERE) were no longer round with a spun sugar flame, but longer shell shape (left).

"It may, however, be mentioned that the plombiere and the fromage are now rather out of date; the bombe, in its original form, being also old-fashioned, though its name is still seen on menus.

Bomb
Originally it was introduced by Francatelli, it is said, and was then made in the shape of a shell or bomb, the flame that is emitted by a live shell, being reproduced in spun sugar. This grim reminiscence of war declined in favour after the Crimean campaign; now, though the name still remains, the shape is altered, as will be seen by Fig. 1, and almost all tall conical moulds are called by this name nowadays.

Plombiere
The plombiere derived its name from the metal of which the mould was made originally, namely lead (plomb), and the term was applied rather indiscriminately to the mould and to the pail or sorbetiere in which the ice was made.
Fromage The fromage, or cheese, was a plain mould divided internally by strips of metal, allowing of differently coloured and flavoured ices being slipped in, the strips being then removed, the whole lightly pressed together, and frozen as a whole was, however, sometimes served as a block of one sort of ice only, generally sweetened, frozen, pure cream, and used as an accompaniment to fruit.) The modern version of this ice is the Neapolitan, a brick-shaped mould (see Fig. 2) filled in layers with differently tinted and flavoured ices, then turned out, and sliced across so as to show the stripes.

Iced Pudding
The iced pudding is a more or less rich custard mixed with preserved fruits, &c, packed in a mould and frozen; this of course may be of almost any shape.

Iced Charlotte
The iced charlotte is, as its name implies, made in the ordinary plain charlotte mould, lined with biscuits, wafers, slices of Genoa or other rich cake, &c, and filled up with any ice to taste. A very modern version of this is the gateau glace, when a rich cake of some kind is hollowed out and served with a fruit garnish and a filling of any sort of ice. 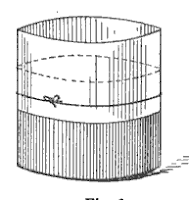 Iced Souffle
The iced souffle is a very rich form of very light whipped custard, placed in a papered souffle mould, allowed to set in the ice cave, and finally served with the outside paper removed to give it the appearance of having risen (see Fig. 3, for the papering of the mould).

Iced Mousse
The mousse is made of the same preparation as is used for the iced souffle, only it is moulded instead of being put into the souffle case. The difference between this and the ordinary ice pudding is that in the latter case the ice to be used is first frozen in the freezer till of the consistency of very thick batter, and is then put into the mould, care being taken to press the ice well into the shape of the mould so that when turned out the outline should be clear and distinct; whereas the souffle or mousse is mixed and poured at once into the dish in which it is to be served. Lastly, there are the moscovite, and the spongada. The former is a simpler form of iced pudding stiffened with a small proportion of isinglass or best leaf gelatine, which is, however, never actually frozen, though it is iced till as cold as it is possible to get it. It is therefore well adapted for use in households where freezing conveniences are not available.

Spongada
The spongada is a very light form of whipped cream ice, common in Italy, but seldom, if ever, seen in this country, save when it is occasionally used to fill up a mould lined with ordinary cream or water ice.

Parfait
Besides these there is the parfait, which is very much the same as the spongada, only frozen a little more stiffly, the latter being more like frozen froth, whence its other name of spumante or foaming.

Neapolitan Ice
Another form of varied ices is the Neapolitan ice. For this you have the brick-shaped mould, illustrated in a previous chapter, fill this (if you have the conveniences therefore) with separately frozen ices, which must be of the consistency of rather stiff batter, and arranged in very smooth layers, in varied colours and flavours as you please; for instance, a layer of vanilla cream, then a layer of strawberry water, and lastly chocolate cream; or strawberry and white coffee cream ices; or a brown bread cream ice delicately flavoured with cognac, a coffee ice, similarly flavoured with maraschino, and lastly a vanilla cream; or begin with the vanilla made on a foundation of rich custard, and use whipped or scalded cream only for the other two. In short, these can be varied in any way you fancy. They are generally served, when turned out, by being sliced down about three-quarters to one inch thick and served en couronne, or in little separate lace papers.

Where there is a difficulty with regard to freezing tubs, the best way is to prepare a quart of more or less rich, sweetened, but unflavoured, custard or cream, and when rather more than half frozen divide it into two or three parts as desired, flavouring one with, say, vanilla, and lay this smoothly in the mould, then take another portion, and stir into this, say, an ounce of chocolate melted in a little cream, and place this on the vanilla layer; and finally add to the third portion sufficient green colouring to bring it to a faint pistachio tint, and stir into it an ounce or so of blanched and chopped pistachios. At the same time, in houses where ices are in great request, if economy forbids the purchase of two of Mrs. A. B. Marshall-s freezers, have, besides one of these, one of Roberts- capital little freezers, mentioned before, and use these for the water ices. They are so inexpensive that they are well worth investing in, at any rate. (Only remember that, to insure their being always in good order, they must be scrupulously wiped and dried each time after use. Of course the same remark applies to the more costly machines quite as forcibly, but these being of stouter materials do not revenge neglect so quickly as do the smaller and slighter-made machines.)
The "Queen" Cookery Books.  No. 2.  Ices.  London: 1899, 1902