Michael Willis, as the cook for many years at the Thatched House Tavern, prepared meals for members of the prestigious clubs which met there.  He wrote Cookery Made Easy in 1824 and another in 1831.

Thatched-House Tavern was located for almost two centuries on St. James Street, London.  It evolved from a small hotel in 1711 when Swift had to "send out for wine, the house affording none."  During the Regency Bill debates, Lord Thurlow called it the "ale-house." [Walford, Old and New London, 1878, and image of exterior]

"The large club-room faced St. James's-street, and when lit in the evening with wax-candles in large old glass chandeliers, the Dilettanti pictures could be seen from the pavement of the street. Beneath the tavern front was a range of low-built shops…" [John Timbs, John. Club Life of London vol. 2. London: 1866].  The Dilettanti Society met there on Sunday evenings during the 'London season' and "...the portraits of whose members—many of them painted by Sir Joshua Reynolds—adorned the walls of a room which was devoted exclusively to their accommodation."  [Walford]


Beef steak pie - smelled like a dog at a Literary Club dinner, as recounted by Joseph Cradock in his 1826 Memoirs:

One of the party near me remarked that there was an offensive smell in the room, and thought it must proceed from some dog that was under the table; but [Edmund] Burke, with a smile, turned to me and said, 'I rather fear it is from the beef-steak pie that is opposite us, the crust of which is made of some very bad butter which comes from my country [Ireland]. Just at that moment Dr. [Samuel, image below] Johnson sent his plate for some of it; Burke helped him to very little, which he soon dispatched, and returned his plate for more; Burke, without thought, exclaimed, 'I am glad that you are able so well to relish this beef-steak pie.' Johnson, not at all pleased that what he ate should ever be noticed, immediately retorted, 'There is a time of life, sir, when a man requires the repairs of a table.' 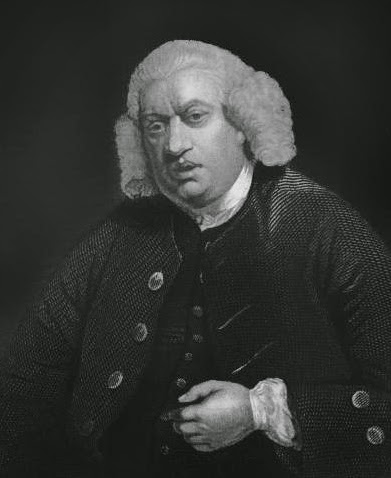 Cookery made Easy:Being a Complete System of Domestic Management... for small families, housekeepers... Being the Result of actual Experience.  By Michael Willis, many years cook at the Thatched-House Tavern.  The cookbook had a butcher's shop as its frontispiece.

Although many cookbooks of the time included recipes for a Beef-Steak Pie, Willis's book did not. Burke was undoubtedly making a joke about the pie... but it is fun to think it did not 'make the cut.'  Among the meat pies which did make the cut into the book were mutton, veal and venison.


Paste for raised Pies.
To a quartern of flour, take one pound of butter and cut it in pieces in a saucepan of water over the fire; when the butter is melted, make a hole in the flour, skim off the butter, put it in the flour, with some of the water: and make it up in a stiff paste [crust].

Mutton Pie.
Season the steaks, lay on butter, and close the pie. When baked, toss up a handful of chopped capers, and oysters in gravy, with an anchovy, and draw* batter.

Veal Pie.
Raise a high round pie, cut a fillet of veal into four fillets, season it with savoury seasoning, some minced sage and sweet herbs; lay it in the pie, with slices of bacon at the bottom, and between each piece lay on butter. When cold, fill it up with clarified butter.

Paste for Venison Pasties.
Take two pounds of butter to a quartern of flour rub it all in your flour, but not too small; make it into a paste, and beat it with a rolling-pin for an hour before it is used; you may beat three or four eggs, and put them into the paste.

Venison Pasty.
Raise a high round pie, shred a pound of beef suet, and put it into the hot tom; cut your venison in pieces, and season it with pepper and salt. Place it on the suet, lay on butter, close the pie, and bake it.

Hannah Glasse. Art of Cookery, 1784:
A Beef -Steak Pie.
TAKE fine rump steaks, beat them with a rolling pin, then season them with pepper and salt, according to your palate. Make a good crust, lay in your steaks, fill your dish, then pour in as much water as will half fill the dish.