What's in a name...?  Several types of ovens have been called Dutch Ovens.  They were generally cast iron bake ovens, or metal (tin or copper) reflector ovens.  Some inventories specified – “2 iron dutch ovens with only one lid” or “tin dutch ovens” while others listed only “oven” or “dutch oven.” And then the brick...

The iron bottom section has three legs so hot coals can be placed under the oven.  The lids evolved over time to become a concave tight fitting lid to hold coals. Historically it has been called various names - bake oven, oven, lidded kettle, bake kettle and more.

A 17th century one with 'triangular' ears for the bale (handle) from the Saugus Museum:

Lodge Co., currently the main company which makes various iron cookware, calls this a "Camp Oven" or "Camp Dutch Oven" and the one with a convex lid is called a "Dutch Oven."  The image is from the 1880s: 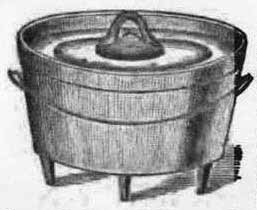 Two 17th century Dutch paintings contained what today is called a 'tin kitchen' - a shiny tin body to reflect the fire and cook meat on a spit; also items on a tray or on the floor of the oven.  The first is from c1660, the second was forty years earlier. 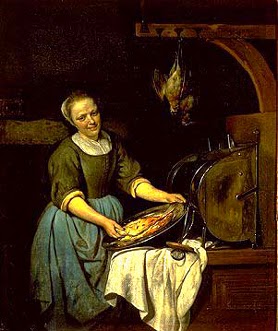 An American Dutch oven from the 1820s:

Image from the 1850s with a shelf, labeled as Dutch oven: 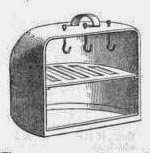 In a few HABS (Historic American Buildings Survey) reports, Dutch oven referred to the protruding back of an inside brick oven or a brick oven.

Baking over a fire in a "pot oven" or "cottage oven" in Welsh film clip, blog post HERE