16 overshot wheels - using water from an aqueduct - ground an estimated four and a half tons of flour per day!  If that was not enough, the Romans cut through solid rock on top to connect the aqueduct they built to the mill troughs. AND they built the stone complex on a steep hill in Gaul (France).  All this during the 1st century.


The water flowed downhill in troughs acting as a 'mill race' turning the water wheels which moved the gears to the mill stones grinding the grains of wheat into flour. 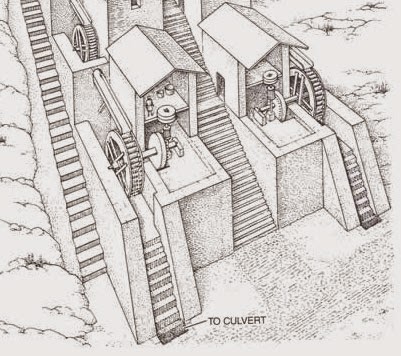 The image is from "A Roman Factory" by A.T. Hodge in Scientific American, November 1990.

For another large scale operation... a smoke house... see my post on HUGE fish smoker 1779