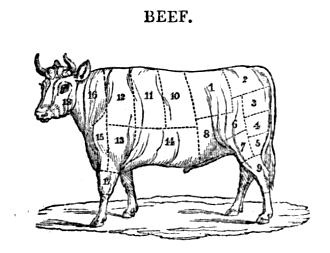 "Eating pork-marrow will make a person stupid" was an 1825 saying. Beef marrow from within the bones was clarified over very low heat to be used as a substitute for butter and to store for longer periods.


Elizabeth Acton gave instructions for clarifying beef marrow and several uses for the clarified marrow which would “remain good for months” in the 1845 and 1860 editions of her Modern Cookery published in London (given below).  I made this once with one batch at the electric stove on low and one at the hearth.  There really is a difference if not low enough, and I also found once melted, there were small chunks (Acton called sediment) which had to be strained out.

It is a most preposterous thing to eat pig's marrow; everybody knows that it drives people mad. There is a curious Welsh proverb in Howell's collection, 1660 [Lexicon Tetraglotton, an English-French-Italian-Spanish Dictionary… with…Proverbs…James Howell. London: 1660] which alleges the same thing." Willis's Current Notes: a series of articles on antiquities…George Willis 1853

"Eating pork-marrow will make a person stupid." [from a list of English superstitions] in The Asiatic Journal and Monthly Miscellany, Volume 20 By East India Company. London: August 1825


CLARIFIED MARROW FOR KEEPING.
Take the marrow from the bones while it is as fresh as possible; cut it small, put it into a very clean jar, and melt it with a gentle heat, either in a pan of water placed over the fire, or at the mouth of a cool oven; strain it through a muslin, let it settle for a minute or two, and pour it, clear of sediment, into small jars. Tie skins, or double folds of thick paper, over them as soon as the marrow is cold, and store it in a cool place. It will remain good for months.


(From Shin of beef stock) Let the bone be broken in one or two places, take out the marrow, which, if not wanted for immediate use, should be clarified, and stored for future occasions;…


Two sheets of paper spread separately with a thick layer of butter, clarified marrow, or any other fat, and fastened securely over the outside of a joint, will prevent its being too much dried by the fierce heat of the oven.


TO PREPARE BEEF MARROW FOR FRYING CROUSTADES, SAVOURY TOASTS,
At a season when butter of pure flavour is often procured with difficulty, beef-marrow, carefully clarified, is a valuable substitute for it; and, as it is abundantly contained in the joints which are in constant request for soup-making, it is of slight comparative cast in a well managed kitchen. It is often thrown into the stockpot by careless or indolent cooks, instead of being rendered available for the many purposes to which it is admirably adapted. Take it from the bones as fresh as possible, put it into a white jar, and melt it with a very gentle degree of heat at the mouth of the oven, or by the side of the stove, taking all precaution to prevent its being smoked or discoloured; strain it off, through a very fine sieve or muslin, into a clean pan or pans, and set it aside for use. It will be entirely flavourless if prepared with due care and attention; but, if dissolved with too great a degree of heat, it will acquire the taste almost of dripping. A small quantity of fine salt maybe spriukled into the pan with it when it is used for frying.

Cut very evenly, from a firm stale loaf, slices nearly an inch and a half thick, and with a plain or fluted paste-cutter of between two and three inches wide press out the number of patties required, loosening them gently from the tin, to prevent their breaking; then, with a plain cutter, scarcely more than half the size, mark out the space which is afterwards to be hollowed from it. Melt some clarified beef-marrow in a small saucepan or frying-pan, and, when it begins to boil, put in the patties, and fry them gently until they are equally coloured of a pale golden brown. In lifting them from the pan, let the marrow (or butter) drain well from them; take out the rounds which have been marked on the tops, and scoop out part of the inside crumb, but leave them thick enough to contain securely the gravy of the preparation put into them. Fill them with any good patty-meat, and serve them very hot on a napkin.


Obs.—These croustades are equally good if dipped into clarified butter or marrow, and baked in a tolerably quick oven. It is well, in either case, to place them on a warm sheet of double white blotting-paper while they are being filled, as it will absorb the superfluous fat. A rich mince, with a thick, well-adhering sauce, either of mutton and mushrooms, or oysters, or with fine herbs and an eschalot or two; or of venison, or hare, or partridges, may be appropriately used for them.


SMALL CROUSTADES A LA BONNE MAMAN.
(The Grandmama's Patties.)
Prepare the croustades as above, or use for them French rolls of very even shape, cut in thick equal slices. If quite round, the crust may be left on ; mark each slice with a small cutter in the centre, dip the croustades into butter or marrow, fry them lightly, or bake them without permitting them to become very hard; empty, and then fill them; dish them without a napkin, and pour some good brown gravy round, but not over them.


Obs.—From being cooked without butter, these and the preceding patties are adapted to a Jewish table.