Poet Robert Burns called Scotland the "land o cakes" - oatcakes. So after the article on tools, I want to sneak in some upcoming Burns talks. One talk includes a tour and history of his birthplace, now a museum, and the annual Burns Dinner to celebrate his birth.


UTENSILS USED IN MAKING OAT-CAKES, AND FOR OTHER PURPOSES

"Our first illustration [above] shows a few utensils used in making oat-cakes, a “cat,” and a beer-warmer. Cycling in Derbyshire [England] a few years ago, I halted at a wayside cottage for a cup of tea. The good house wife was making oat-cake in a way that I had not before seen.

The batter, or whatever the mixture of meal and milk may be called, was poured on to a flat stone under which a flue ran.

As the mixture thickened from the heat, the sluice knife (the blade hanging fourth from the left on the top row) was passed under the cake to prevent it adhering to the stone.

It soon required turning, which was done with the “backboard” (third from the left), in the same way that a skilful cook would turn a pan-cake.

I understood that several cakes were made at the same time, and when subsequently wanted, they were toasted by being spread on the spiked frame on the right, which moves up and down by a spring, or placed in one of the two other toasters which could be hung on one of the fire-bars.

On the left of the group is a press [wafer iron] for making “wafers,” or very thin oat-cake, and, just below, a convenient stand for keeping plates warm in front of the fire.

Underneath this is a "cat" — a brass ball into which six brass legs are screwed, very handy for keeping cakes hot at the fire. I am told it is called a “cat” as, place it how you may, it always stands on its feet. 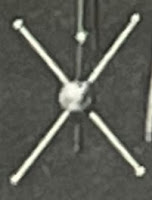 On the extreme right of the group is a beer-warmer - a tin funnel about sixteen inches long — that would hold a quart of beer. The narrow end was plunged into the fire, and hot ale was soon served to the customer. In my young days these warmers were to be seen in every inn, but, like many other pieces in the group, are now seldom to be found except in collectors' hands."

Maberly Phillips , F. S. A. “Bygones from the Georgian Times Appliances from Kitchen, Hearth, and Barn” in The Connoisseur Feb 1918 p86

I have no say over the choice of the following ads ("you might like" links) with this email service.