This unusual cooking pot is not entirely cast iron. It has a cast iron bottom which extends 3/4" up the thinner metal body. Both sections feel and sound different, and are probably from a three part mold. My great grandmother used it on her wood stove or at the large stone hearth in an outbuilding on their eastern Penn. farm. Perhaps it's a transitional iron pot from hearth to cookstove?

The bottom and inside bottom feel and sound like cast iron - thud, but as I tap up the side it pings, the metal is thinner and feels very smooth. The cast iron goes from the bottom up to 3/4" of the side.

What is it and where/how was it made? A transitional iron pot for hearth then into a wood cookstove? A bottom repair? or ...? Does anyone have or used one of these pots? I own and have used many cast iron items and pots of various metals while hearth cooking the last 30 years, but never used one like this.

The basics: elongated bulge pot with 'cow's horn ears', wire bail and a metal upper section joined at each side, with curving rim. 8 3/4" high with a 10" diameter at the top, 8" diameter at bottom, a thick cast iron bottom with a thin gate, number '8', and stub legs. Likely a three part mold, but I don't know how this bottom was joined to the thinner two metal sides with two seams.

Interior showing the round cast iron bottom with some rust. The side (body) is smooth (flash) - 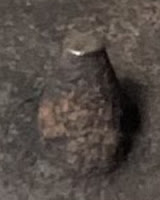 Seam down side and bottom gate -

My great grandparents married in 1900 and bought a farm near Saylorsburg, north of Bethlehem/Allentown PA. The farm had some German aspects (they were of German ancestry) such as a chicken ladder he made to a tree HERE and a bank barn like the one HERE. In addition to farming, he was also a butcher selling his meat from a wagon. The outside of the pot looks like it was painted black, perhaps by my grandmother (it held her magazines) after 1960 when her mom died. Lizzie, 1909 photo.

The large stone fireplace of the out kitchen/wash house, snowing - 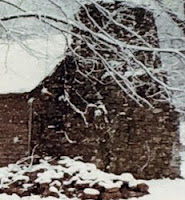 Se 15 Wed 2 Cutlery for Afternoon Tea. Victorian “over 50 unusual objects that were made in Sheffield and then shipped around the world to adorn dining tables.” Nick Duggan. Sheffield Museums HERE

Se 22-25 W-Sa Food Matters and Materialities: Critical Understandings of Food Cultures - An international and multidisciplinary conference. “how power relations take form in contemporary food cultures and materialize in particular food matters/materialities and in a wide range of food-related practices such as production, harvesting, circulation, preparation, control, and consumption.” HERE

Oc 20 Wed 2:30 Pots for socks. Commodity itineraries in the North Atlantic during the 17th and 18th Centuries. “reconstructs the journeys of three cooking pots from different places in northern Germany and Denmark and along the way, attempts to situate these journeys within the social and cultural contexts through which they pass.” Gavin Lucas, Jakob Orri Jónsson and Kevin Martin HERE