German foodways - in Germany and US

Octoberfest (Volks-Fest, Festival) started in Munich, Germany during the wedding celebrations for the future King Ludwig to Princess Therese on Oct 12, 1810, and now is held the end of Sept until the first Sunday in October.

Voices from Russia: the Volga-Germans. History of Germans in Russia, Dr. Brent Mai; “Sam Brungardt, an expert on Volga-German foodways who will discuss the delicacies that are unique to these peoples.” Russian - American Business & Culture Council (RABCC) May 22 2021 TAPE HERE 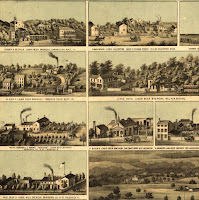 Alice's Book: How the Nazis Stole My Grandmother's Cookbook. Alice Urbach (1886-1983) “cookery book writer, is forced to flee Vienna for England. Returning …in the late 1940s, she discovers that her bestselling cookbook is being published under a different name.” Karina Urbach. Leo Baeck Institute May 15 2022 HERE TAPE HERE

The Lost Cafe Schindler: One Family, Two Wars, And The Search For Truth. “a grand Viennese-style coffee-house, founded by her grandfather as an antidote to the horrors of fighting in WWI...” in Innsbruck, taken by Nazi in WWII, reclaimed after war. author Meriel Schindler. May 1 2022 TAPE HERE

Many posts on German and Pa German topics HERE