Mustard seeds and vinegar makers in 1765 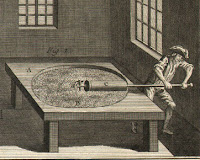 Mustard seed merchants had to wait until vinegar makers, who also made mustard, had inspected and chosen the seeds they wanted. Large scale mustard grinding from Diderot's encyclopedia. Upcoming talk on Colman, the "mustard king."

"Mustard, mustard seed, a plant bearing seeds which are commonly known as mustard seeds, because they are used in the composition of mustard.

There are three sorts of mustard: wild mustard, garden mustard, and a third which is derived from the first two. The second and third are raised from seed, and the black seeds of garden mustard are used to make mustard. [1]

Notes
1. This ‘wild mustard’ is Brassica hirta or white mustard, which is native to southern Europe. Its seeds are sometimes blended with those of Brassica nigra (black or brown mustard) or its cultivars (Mabey, 1996, p. 154). See D. J. Mabberley, The Plant-book: a Portable Dictionary of the Vascular Plants (Cambridge, 1997), 99-100.