Civil War bake ovens in the US Capitol

First and foremost, thanks to all Veterans and those who are serving now.

Following the attack on Fort Sumter in April 1861, four thousand soldiers moved into the newly remodeled Capitol. Men from Mass. quickly built two ovens in the basement to make the bread portion of their rations. Other ovens were built, producing 65,000 loaves a day (24/7) for a year and a half.

Everyone had to maneuver around the 196 pound flour barrels (at times 20,000 barrels a month) piled high in Washington's Crypt (pictured) and the corridors. 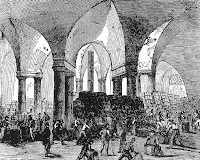 When needed, the barrels were rolled down planks on the marble staircase from the Crypt and halls into the basement.

Huge amounts of flour (3 barrels per batch), water and yeast were mixed and kneeded in large built-in troughs. 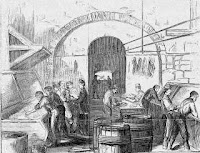 Yeast - fourteen hundred gallons per day - was made in a seperate room.

After on shelves for 20 hours (or 10 to 12 hours if in a hurry) the bread was issued through a couple basement windows into the wagons.

Generally I write blog posts on odd or interesting subjects that I have run across during my main research areas, and yet... this year I've written about three of my flue-zies - Rumford Roasters (& never seen pieces), Outside ovens and the Capitol Bakery. A decade ago I spent a few years researching the ovens in the Capitol - was escorted into the various rooms in the basement, researched at two National Archives, Library of Congress, and even several military libraries and archives (great staffs).

Thanks to my Dad - who fought the Nazis in Italy and Germany.