Bacon or meat racks hung from the ceiling beams in front of hearths in Great Britain. By 1823 "every kitchen" had the racks which were also an "impediment to upright walking." Image from 1758.

A simple rack in front of the hearth. Entire picture is further down.

Ham or game were also hung up by rope, individual hooks or a separate meat holder.  Note the rope to raise or lower the rack (stair railings going down, ropes going up). Before 1697. 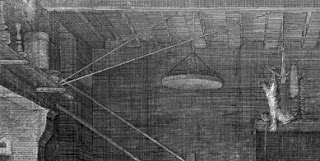 The meat is not over the smoke (up in chimney, smoke closet, or out in a smoke house), so is "only dried by the salutary heat of their pleasant wood fires." [1823], image before 1603.

In addition to drying meat, the high rack also kept it safe from "rats and cats" and by hanging the "bacon, tied up in bags of unbleached calico to keep off flies..." So many other items were stored up high on the rack that one author saw only "a small supply of that article [bacon] and some dried beef" with "a large collection of walking sticks and an old gun." The paper bags were labeled and contained dried herbs (mint, horehound, hyssop...), elder and marigolds.

The racks could be "formed by simply nailing the narrow raps of wood to the joists, and utilizing the spaces between the joists for storage purposes." More complex was "a large framework consisting of three boards about one foot deep joined together, and suspended horizontally from the ceiling, with a number of thin and narrow bars of wood about one inch apart nailed across the bottom of the framework, having one side left open..."

A dozen works from 1823 into the 1900s described bacon racks and what they held.  Two early works use the term "depending from the ceiling" or "depended" which dictionaries of the time described as "to hang from."--


"Buckinghamshire ... Even where the chimney corners are not wide enough, the bacon rack alone, which is seen depending from the ceiling of every kitchen, will often suffice to dry a flitch or two of bacon; particularly as they do not want it tainted by smoke, but only dried by the salutary heat of their pleasant wood fires."
Radcliffe, M. A modern system of domestic cookery. Manchester: 1823

"As it is particularly delightful to me to see in a poor man's house, indications of plenty, fore-thought, and comfort, I could not but observe with great satisfaction the cheerful bacon rack, on one end of which were deposited a whole and a cut flitch; and at the other end, far away from the bacon, a stock of soap cut up in pieces to harden… at least one piece in five is saved. From the spars of the rack, hung at one end, ropes of onions, and at the other a row of paper bags, containing dried herbs, each neatly written upon, 'Mint,' 'Balm,' 'Sage Camomile,' 'Senna 'Hyssop,'  'Marigolds,' &c."
Christian gleaner and domestic magazine.  London: 1825

"…huge bacon-rack, which depended over the hearth, and caught ever and anon fresh wreaths of smoke to enrich the the flavour of the fat sides and hams of cured swines'-flesh , entire bodies of dried sea-fowl and fish, and huge ropes and bunches of onions and desiccated pot-herbs, preserved for the service of the ensuing winter."
Gillies, Robert Pearse.  Thurlston Tales vol. 3. London: 1835

"In the meat larder there should be fixed the balance for weighing, a bacon - rack suspended from the ceiling, hooks sliding on bearers, for hanging joints, game, etc."
Lady Bountiful's legacy to her family and friends…ed John Timbs.  Edinburgh: 1868

"... their rude farm-houses, mainly built in timber frames, and lathed and plastered in and out, (except on the ceiling where hangs the bacon rack,)"
Rogers, James Edwin Thorold.  A History of Agriculture and Prices in England: (1259-1792)1882

"Bacon-rack, a rack on the ceiling… is suspended horizontally under the beams in most farm-house kitchens; here the bacon dries, and is kept safely from rats and cats."
Wright, Joseph.  The English Dialect Dictionary.  Oxford: 1898

"Suspended from the ceiling is a serious impediment to upright walking in the shape of a bacon rack, on which is, perhaps, a small supply of that article [bacon] and some dried beef , also some dried herbs in paper, a large collection of walking sticks and an old gun… From the rack before mentioned is generally suspended a piece of rennet for making cheese…"
Wallace, Alfred Russel.  My Life: A Record of Events and Opinions - Vol 1  London: 1905

"Two or three chests , made by a cotter during long winter evenings , stood by the walls ; a bacon - rack dangled from the roof - timbers ; some dried herbs, employed as medicine, hung in bunches here and there ; and a wood fire burned ..."
Sparrow, Walter Shaw.  The English House: How to Judge Its Periods and Styles.  London: 1908

"From a bacon-rack fixed under the beams of the ceiling hung hams and sides of bacon wrapped in dry bracken and paper, with strings and bags of parched herbs — horehound, elder, mugwort,—specifics against various family ailments."
Quiller-Couch, Arthur.  News from the Duchy. Bristol: 1913

"The old Devin farmhouse… In the top left-hand corner of the kitchen, above the fireplace, is the bacon-rack, a large framework consisting of three boards about one foot deep joined together, and suspended horizontally from the ceiling, with a number of thin and narrow bars of wood about one inch apart nailed across the bottom of the framework, having one side left open, in which flitches of bacon, tied up in bags of unbleached calico to keep off flies, are placed, after being taken out of the brine.  Here the bacon dries, and is kept safely out of the way of rats and cats.  In unceiled kitchens the bacon-rack is formed by simply nailing the narrow raps of wood to the joists, and utilizing the spaces between the joists for storage purposes."
Report and Transactions of the Devonshire Association for the Advancement of Science, Literature and Art.  Sidmouth, UK: 1923

"Suspended from the joists are two parallel bars, that, had they been in a back kitchen or some other cooler place than just before the fire would have been taken for a bacon rack; here they are no doubt used for airing sheets." [Welsh kitchen, photo]
Jekyll, Gertrude Old English Household Life: Some Account of Cottage Objects and Country Folk. London: 1925

“Depend  to hang from, rely on, trust”
Webster, Noah.  A Dictionary of the English Language.  1817