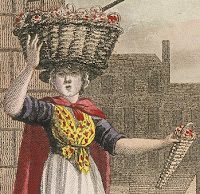 My blog came into being as a place to write about all the interesting, odd subjects I found during my main research and foods prepared in my classes and while demonstrating at museums.  My first post was on Raffald's Chocolate Puffs in July 2009, and over 500 posts later, perhaps it is time to do a recap of some of the most popular. Occasionally my primary research topics make their way into the blog.

The 1815 kitchen in Gadsby's hotel contained some of my favorite flue-zies - stew stove, steam kitchen (image), iron wall oven, smoke jack, even laundry equipment (which is interesting, but not a major interest).  Bonus: the state-of-the-art apparatus was described in a woman traveler's diary. HERE

The most popular post is Snap-apple.  A curious game for Halloween where two players try to bite an apple rotating with lighted candles.  And not get burnt.  HERE More on Halloween HERE

Food, cooking and dining often appear in art.  One of my favorites involves chocolate in paintings by Jean-Etienne Liotard (1702-1789) HERE

Robert Roberts (c1777-1860) wrote THE federal dining manual - The House Servant's Directory in 1827. He was a remarkable man - he left Charleston for Boston, then as a free African American negotiated for a job with a former governor to manage his huge house, wrote the instruction manual, and was an active abolitionist. Bonus: a wonderfully unique name.  HERE

Army campaign tables and chairs had several clever ways to close for transport. British officers had some exquisite campaign furniture, while Americans used simpler styles during the Rev War and Civil War. HERE

An amazingly high fish smoker... with women workers climbing up to hang the fish in their long dresses. HERE

Queen Victoria's chef Charles Elme Francatelli (1805-1876) appears in the TV series Victoria.  His bio, with a bit of fact checking HERE, his bomb (ice cream) HERE, and for the third season (OK, I like the show) his dinner using Liebig extract HERE 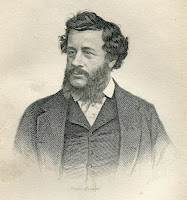 Mary Randolph (1762-1828) wrote the paramount cookbook for the Federal Chesapeake area, so I have made many of her recipes at the hearth. Popular posts include the refrigerator in The Virginia Housewife HERE, her eccentric family HERE, relations with Thomas Jefferson HERE, and recipes HERE

Sugar Mills are very popular, and so many different types. The first post HERE and other sugar mills, sugar, maple sugar, and sugar chests & desks HERE

Rumford Roaster.  So, a Baker’s Dozen and end where I began … Georgian or Federal cooking apparatus… which, admittedly, aren’t popular. But I have been quietly trying for decades to get owners of these metal items (usually in large Federal homes) not to remove them. Ironically, I close with a post from this winter that includes never-before-seen metal pieces of a Rumford Roaster… able to be studied because they were removed from the brickwork. HERE