Elaborate window displays for Twelfth-day cakes in bakeries and confectioneries, like this 1836 image, showed off a huge cake "on large and massy salvers" with many other sizes at the window and on shelves, lit by "argand-lamps and manifold wax-lights."

1826 - "In London, with every pastrycook in the city, and at the west end of the town, it is “high change" on Twelfth-day. From the taking down of the shutters in the morning, he, and his men, with additional assistants, male and female, are fully occupied by attending to the dressing out of the window, executing orders of the day before, receiving fresh ones, or supplying the wants of chance customers. Before dusk the important arrangement of the window is completed.

Then the gas is turned on, with supernumerary argand-lamps and manifold wax-lights, to illuminate countless cakes of all prices and dimensions, that stand in rows and piles on the counters and sideboards, and in the windows.

The richest in flavour and heaviest in weight and price are placed on large and massy salvers; one, enormously superior to the rest in size, is the chief object of curiosity; and all are decorated with all imaginable images of things animate and inanimate. 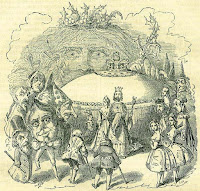 glitter by “excess of light” from mirrors against the wall festooned with artificial “wonders of Flora.” The “paradise of dainty devices,” is crowded by successive and successful desirers of the seasonable delicacies, 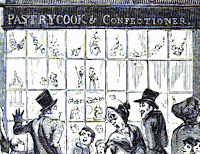 while alternate tapping of hammers and peals of laughter, from the throng surrounding the house [store], excite smiles from the inmates [shoppers in the store]. … boys… nail the coat-tails of spectators… to the window frames.” Past post with details on nailing to wood or pinning coats together HERE

1862
"The celebration of Twelfth-Day with the costly and elegant Twelfth-cake has much declined within the last half-century. Formerly, in London, the confectioners’ shops on this day were entirely filled with Twelfth-cakes, ranging in price from several guineas to a few shillings; the shops were tastefully illuminated, and decorated with artistic models, transparencies, &c. We remember to have seen a huge Twelfth-cake in the form of a fortress, with sentinels and flags; the cake being so large as to fill two ovens in baking. 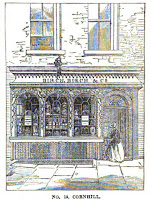 One of the most celebrated and attractive displays was that of Birch, the confectioner, No. 15, Cornhill, probably the oldest shop of its class in the metropolis." (started in the reign of King George I who died 1727, by Mr. Horton, then to Mr. Lucas Birch, then his son who was Lord Mayor in 1815)

Other posts on Twelfth Night cakes, pranks (include full images with the pinning), even a folded napkin HERE