Eating and sleeping in the Capitol at the start of the Civil War, April 1861 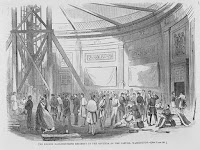 To honor our troops now sleeping on the floor of the US Capitol and visitor's center to protect it from another terrorist assault...

In April and May 1861, Mass and NY regiments were put in the new Senate and House chambers, and in the Rotunda under the unfinished dome. 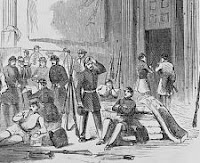 During the early days of the Civil War, the first volunteers to arrive were stationed in the Capitol and then other government buildings. The Eighth Massachusetts, in the Rotunda, slept on mattresses, piled up during the day.

The Eleventh New York were in the House chambers (wearing their unusual Zouave uniforms), some of the men were assigned a desk and slept under it.

On April 19 the Sixth Massachusetts Regiment (the ones who were attacked in Baltimore) were put into the Senate chamber, arranged by their senator (Charles Sumner who was beaten on the Senate floor five years earlier). Rough start. The sketch of the new Senate in 1859.

By May, 4,000 troops from various states were in the Capitol, and a brick mason with the "Bloody 6th" started building brick ovens in the basement. The bakers, and ovens, remained for a year and a half after the other soldiers left. More about the ovens on another post HERE

The first meal for the soldiers in the Capitol in April consisted of hard-tack, flitch (salt cured bacon), green coffee beans which they had to roast on a spoon, and sugar; all handed out in the basement.

By May 6, 1861, as reported by the Weekly Washington Star, cooking and serving food was conducted outside in the coal storage arches under the terraces, or flagways, on the west side. The curved terraces, at the top of Bulfinch's c1825 sketch, were extended to the building a couple decades later.

“When rations are to be served, the men pass in single file in the area along the series of arches, each with a tin plate and tin cup. At the first archway two slices of freshly baked bread are handed to each man; at the next arch his allowance of meat, and at the next his coffee or soup, as the case may be. It takes from two to three hours to serve the whole, and here, too, the men show less impatience than might be expected.” 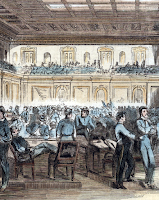