Selling matches on the street

Boys and women sold matches in cities for a modest fee.  They whittled pine or cedar sticks, dipped the pointed end in brimstone or bought the matches from match manufacturers from the "low parts of London."   By 1827 an author claimed "the itinerant Matchseller, will, of consequence, become obsolete."  Pictures from prints and books of "Cries" from London, New York City and Boston...

"Matches – The criers are very numerous and among the poorest inhabitants, subsisting more on the waste meats they receive from the kitchens where they sell their matches at six bunches per penny, than on the profits arising from their sale. Old women, crippled men, or a mother followed by three or four ragged children, and offering their matches for sale are often relieved when the importunity of the mere beggar is rejected. The elder child of a poor family, like the boy seen in the plate, are frequent traders in matches and generally sing a kind of song, and sell and beg alternately." [Craig 1804] 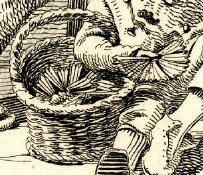 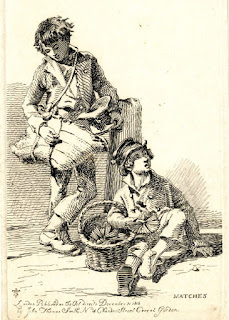 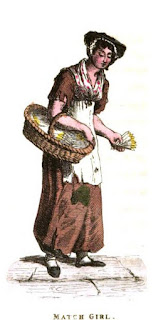 The venders of this once most necessary little article, from the improvements in every branch of manufacture, through the rapid advances in science, are likely soon to take up some other honest calling, to obtain their daily bread. Added to this, since the police have been vigilant in clearing the streets of sturdy beggars, this idle and abandoned fraternity [of men] have invaded the petty trade of the old matchwoman, and the boys and girls, amongst whom the humble business was divided. Hence are to be met in most of the streets inhabited by the working classes, a number of athletic men, too idle to work, with a basket on their arms, vending matches, by which these vagabonds escape the penalties awarded to mendicants.

Amongst the customs and habits of the itinerants, now worn out of date, is that of the musical Match-seller, who formerly was heard, both in town and country, chaunting his wares in a simple melody, as old, no doubt, as many other popular cries. These criers had a ditty of many verses, which terminated in rhyme, and was varied occasionally, agreeably to the artless invention of the party. As it is likely that these rude verses may be lost, we shall, as a remnant of the popular antiquities peculiar to our island, subjoin a few stanzas.

The poor people, we speak of the legitimate traders in these wares, stoop down at area rails, and address their customers in a plaintive voice, these are the servant-maids who are busied in the kitchen. The supplicants rarely depart, such is their accustomed importunities, until angrily bidden to go, or are sent away with a halfpenny, for which they give three or even four small bundles, of "good, picked, pointed matches, well brimstoned;" these are usually bought of match manufacturers, who reside in the low parts of London, and who formerly disposed of them to petty grocers, oilmen, and keepers of chandlers shops.

But, of late the trade is fast falling off [1827], for the general diffusion of light, which is spreading far and wide, when science can furnish an instantaneous, flame from a chemical preparation, which with a phial, an hundred matches, and a smart case, are together sold for four-pence; so that on a sudden emergency, a light can be produced in the dead of the night, without the risk of fracturing the knuckles with the flint and steel, the uncertainty of ignition, or creating that sulphurous nuisance, the smell of burning tinder.

There have been many inventions, some of them known to our forefathers, well calculated to supersede the uncertain method of striking a light with the flint and steel; amongst others, that of the pistol tinder box, which cost little, and was efficient to the purpose; but such have been the stubborn prejudices touching certain household affairs, that until of late, the old method has been adhered to, in defiance of all improvements.

The discovery of the self-igniting phial, or instantaneous light, has at length obtained pretty general notice, and by degrees has been so simplified, and rendered so cheap, that it is likely in a short time it will come into use in every family. So that the trade of the itinerant Matchseller, will, of consequence, become obsolete." [Pyne] 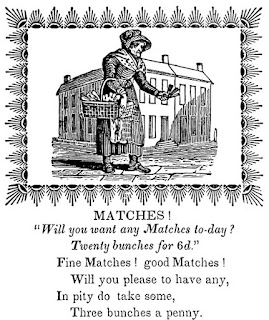 “To sell matches, is the employment of women and children who make a few pence honestly, by slitting pine or cedar sticks, or procuring long thin shavings, the ends of which they dip in brimstone, which, when touched by a spark, will blaze directly. Though a small matter, it is a great convenience to house-keepers." [NY 1925] 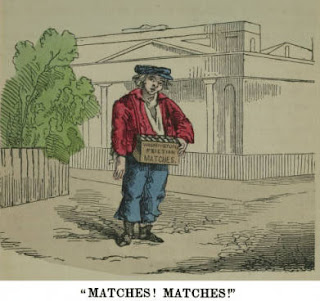 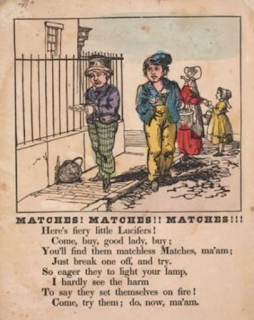