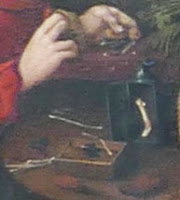 It was hard work lighting and maintaining fires for cooking and heat.  A few coals could be saved from the previous day or coals borrowed from a neighbor's fire.  Flint and steel was tricky, especially if the "flint was dull, and the steel soft."  Then there were the more unknown methods such as the "Bamboo strike-a-light" (bamboo struck by a piece of porcelain).

"All fire and no smoke, a very good flint for use in lighting fires"

"Friction matches had not then [early 1800s] been sent from the regions of brimstone, to enable every boy or beggar to carry a conflagration in his pocket. If there were no coals left from the last night's fire, and none to be borrowed from the neighbors, resort was had to flint, steel, and tinder-box.

Often, when the flint was dull, and the steel soft, and the tinder damp, the striking of fire was a task requiring both energy and patience. If the edifice on the andirons was skilfully constructed, the spark being applied, there was soon a furious stinging smoke, which Silliman told the world some years after, consisted mainly of pyroligneous acid. Nevertheless, in utter ignorance of this philosophical fact, the forked flame soon began to lick the sweating sticks above, and by the time the family had arisen, and assembled in the "keeping room," there was a roaring blaze, which defied even the bitter blasts of winter—and which, by the way, found abundant admittance through the crannies of the doors and windows. To feed the family fire in those days, during the severe season, was fully one man's work." [image Hough; excerpt Goodrich]

Tinder-boxes.—There are three ways of striking a flint, which are best explained by sketches. Fig. 1,  shows how tinder that is tough enough to bear handling, is grasped together with the flint. When no tinder-box is at hand the more friable kinds of tinder, as touch-wood, may be enveloped

in a roll of rag and be used either as in fig. 1 or in fig. 3. Fig. 2 shows how tinder may be laid on the ground, and how sparks may be struck upon it. The household tinder-boxes of thirty years back, before lucifers were invented, were for use in this way. Fig. 3 shows how sparks may be struck into a small tinder-box. It is the method most commonly adopted by travellers: for instance, it is universally used in South Africa and in North America. A hollow cylinder of wood or metal, about three inches long, and corked up at one end, is all that is essential. If it be barrel-shaped the flint lies against its sides, at the most convenient angle for striking sparks into the box, as is shown by the bottom drawing of fig. 3.  [Galton]

ETHNOGRAPHY OF THE BAMBOO STRIKE-A-LIGHT
"One of the most surprising examples of aboriginal technology connected with fire making is the bamboo strike-a-light.
"For striking a light the men carry in their waist belt a small bamboo prettily carved, in which some tinder and a bit of porcelain are kept out of the rain. By holding the tinder and the piece of broken plate in the right hand, and striking it sharp on the side of the bamboo, the tinder is lighted."
Were it not for the scientific standing of those who have published their observations on this method, the matter might be dismissed as a traveler's tale. The flint and steel strike-a-light is easily understood as a scientific and widely distributed way of making fire, but the use of wood instead of steel is anomalous, to say the least.
The great naturalist, Alfred Russell Wallace, in the well-known work, The Malay Archipelago, describes the bamboo strike-a-light as follows: "The Ternate people use bamboo in another way. They strike its flinty surface with a bit of broken china and produce a spark, which they catch on some kind of tinder" (p. 332).
In various other parts of Malaysia this fire-making device is found, and in the Philippines it is seen among the Battaks of Palawan and the Malays of Balaback. The device is found in Cochin China.
The Alfuros of the Waigiou Islands, northwest of New Guinea, had the bamboo and pottery apparatus.
"Their method of obtaining fire was new to all of us, the spark being struck from the hard, siliceous exterior of the bamboo and a fragment of pottery, which latter article they had probably obtained from the coast tribe."50
These references indicate that the method had a considerable range, possibly into the Congo region in West Africa. Its distribution has not been worked out, but it is hoped that Henry Balfour will take up the subject. The writer finds no difficulty in making fire by this method. Observations on the specimens in the United States National Museum show that a particular kind of bamboo having a hispid siliceous coating is used. The Filipinos call this bamboo buyo. Smooth bamboos are not serviceable. The tinder must be quick, and the scurf down of a species of Caryota palm (determined by Kew Gardens) or the like is used."[Hough]

Flint and steel in altarpiece in France