Oysters were sold on the streets 'on the half shell' and served with vinegar, salt, pepper, and/or cracknels.  The following images are from Cries of London, New York and Philadelphia from the late 1500s and 1688 through the 18th and 19th centuries. Click to enlarge.

In the years 1600-18, there was published a musical work, entitled “Pammelia—Mvsickes Miscellanie; Or, Mixed Varietie of pleasant Rovndelays and delightful Catches. London, Printed by Thomas Snodhom, for Matthew Lownes and Iohn Browne.” It was compiled by some eminent musicians, who had a practice of setting the cries of London to music, retaining only the very musical notes of them, here we find, “What Kitchen-Stuffe haue you maids,” and there is a Round in six parts to the cry of “New Oysters:”—

Hindley, Charles. History of the Cries of London: Ancient & Modern. 1881 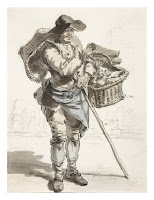 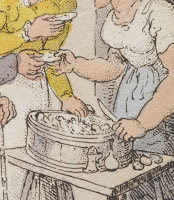 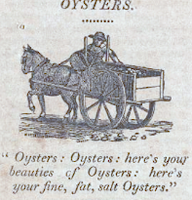 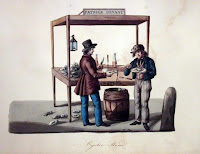 "Oysters form a favourite article of diet with the good people of every city in the season, and immense quantities of them are brought from the oyster-beds on the sea-coast, and sold at the wharves to the innumerable dealers who supply the citizens.

The oyster-trade, now so very considerable, is of recent origin. We have been assured by a middle-aged gentleman, who has always resided in this city since his birth, that he can remember the time when there was but one oyster-seller in the city, who conveyed his small stock from house to house in a wheelbarrow, to which he had ingeniously attached a small table, with its modest furniture, consisting of a small tin plate, some forks, a vinegar cruet, a salt-cellar, and a pepper-box. He would stop before a citizen's door when called, spread his table, open his half dozen oysters, which the customer would partake of alfresco—in the open air.

Little did the ancient oyster-dealer anticipate that within the life-time of one man, he would be succeeded by thousands of his tribe—that oystershops would be opened in almost every street, and oyster-carts present themselves in a hundred different places, and that nearly all these people would drive a successful and lucrative business.

The oyster-cart, such as we have represented in the engraving, is now one of the most common objects which present themselves at the corners of the streets. Many of them have regular stands, where they are to be found nearly every day through the season."
City Cries [of Philadelphia]… designs by Croome.  Phila: 1850 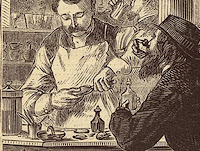