Printed in 1830, the image shows a well fed farmer, whose wife is slicing the plum pudding for dessert.  The children sit at a stool, while one is standing on a bellows with the dog waiting for a slice. The hearth mantle is decorated with greens.

Cutting the round plum pudding 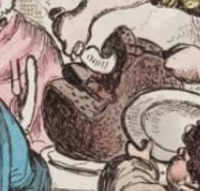 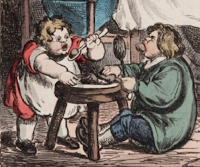 "In London a large sale is carried on in “Christmasing,” or in the sale of holly, ivy, laurel, evergreens, bay, and mistletoe, for Christmas sports and decorations, by the family greengrocer and the costermongers. The latter of whom make the streets ring with their stentorian cry of:—

More on 18th and 19th century "a-Christmasing" - gathering the greens, selling and using holly and other greens - HERE


Farmer Giles's establishment - Christmas Day - 1800, William Heath, published by T. McLean 1830. © The Board of Trustees of the Science Museum, London

Farmer Giles and his wife shewing off their daughter Betty to their neighbours, on her return from school  1809 by James Gillray. © National Portrait Gallery, London