Other Black eyed Susan recipes for the Preakness 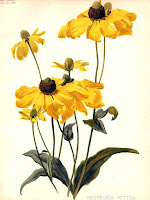 The Preakness Stakes, "second leg" of horse racing's Triple Crown, features Maryland's state flower as the winner's horse blanket and a drink (though not as famous as the Kentucky Derby's Mint Julep).  An 1827 pudding from Domestic Economy and Cookery... receipts for sea-faring men... was probably named for a 1720 poem and later song about a sailor's goodbye.

Boil some lemon-zest in a quart of cream or milk, and pour it over a sufficient quantity of stale crum; let it cool, and beat it up with two ounces of batter; add a handful of plumped currants, and as much minced citron and almonds; beat up four eggs, mix and sweeten it; put it into a bordered dish, or pour over it a nice light custard; strew it with currants: when it is baked, sift sugar over it, or tie it loosely, and boil it in a cloth, and pour a caudle sauce over it; strew it with rasped citron and sugar.
Domestic Economy, and Cookery: For Rich and Poor: containing an account of the best English, Scotch, French, oriental and other foreign dishes, preparations of broths and milks for consumption, receipts for sea-faring men, travellers, and children's food...by Lady [Maria Eliza Rundell]. London: 1827

All in the Downs the fleet was moor'd,
The streamers waving in the wind,
When black-ey'd Susan came aboard.
Oh! where shall I my true love find!
Tell me, ye jovial sailors, tell me true,
If my sweet William sails among the crew.

Black-Eyed Susan sundae
The lower part of a sundae glass is filled with chocolate ice-cream, and the upper part with vanilla. The top is then decorated with a blackeyed Susan, having unblanched almonds for petals and a small chocolate cream for the center.
Two Hundred Recipes for Making Desserts: Including French Pastries.  Olive M. Hulse. Chicago: 1912

Image from The Garden: An illustrated weekly journal of horticulture in all its branches, edited by William Robinson. London, 1895