Limonadier (lemonade seller) Francesco Procopio from Sicily opened his cafe in 1686 and it still is in the Latin Quarter at 13 rue de l'Ancienne Comedie.  Street vendors selling lemonade were so numerous that they were officially recognized a decade earlier, in 1676, with the formation of the ‘Compagnie de Limonadiers’.

Diderot included a sketch of distilling in a limonadier.  It is said Diderot and d'Alembert planned their famous encyclopedia in the cafe.

A sketch portraying Cafe Procope in the 18th century by Badoureau after M Kretz at Musee Carnavalet, Histoire de Paris was printed in a book of engravings.  The renowned customers shown were (from upper left)-

Two hundred years later the Cafe was no longer as prominent as during the French Revolution and before, but several writers recalled its former glory and its furnishings.  One, the purported table of Voltaire (1694-1778).

"The first cafe which was established with any success in Paris was the Cafe Procope... The Cafe Procope soon after its establishment became the rendezvous of the principal literary men of the period, who appreciated the advantages of cafes with a quickness which does them the greatest credit.

The Theatre Francais was then situate in the same street as the Cafe Procope, which was soon made a sort of foyer to the theatre. The new pieces were criticised there immediately after their production, and even disposed of by anticipation; as sometimes happens, in such cases, even in the present day. 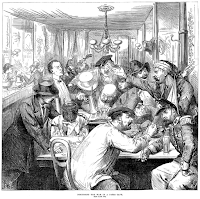 The principal customer appears to have been Voltaire, who took his coffee mixed with chocolate there, and whose presence must have attracted as many persons to Procope's as the coffee itself. The author of the Confessions [Jean Jacques Rousseau (1712-1778)], during his residence in Paris, frequented the Cafe Procope; and his namesake, Jean Baptiste Rousseau [1671-1741], was also one of its habitues. The table of grey and yellow marble, on which Voltaire was in the habit of taking his demi-tasse, is still to be seen at the back of one of the rooms ; and seated at it the students of the Quartier Latin may still indulge in conversation of a more or less Voltairean character.

Fontenelle [Bernard le Bovier de Fontenelle (1657-1757)] made some of his happiest mots, and Piron [Alexis Piron (1689-1773)] uttered some of his most pointed epigrams, at the Cafe Procope. It was the scene of numerous literary triumphs, and also of numerous disputes amongst literary men, some of which have become historical; and it was from this cafe that a crowd of critics went forth to witness the first representation of the best comedy that had been written since the days of Moliere, and which has since never been approached. The Marriage of Figaro was followed by the Revolution, of which the success of its numerous representations showed at once the necessity and the approach ; and since the period of Beaumarchais, the literary celebrity of the Cafe Procope has had no existence.
Bogue, David.  Paris and its environs  London: 1855

Coffee was originally sold in Paris in 1669, at the shop of an Armenian named Pascal, but the trade languished after his death, and was almost extinct, when a Sicilian, one Procopio (whose name was Gallicised into Procope), revived the establishment of Pascal at No. 13, in the street which was then called the Rue de la Comedie. This was in 1724, and the best company soon gathered at the Cafe Procope, including noblemen, academicians, philosophers, and the guards of the king. There, were to be seen Voltaire, Destoucbes, Piron, J. B. Rousseau, Fontenelle, Cr6billon, Diderot, and many more literary stars. The actors also flocked thither, and certain literary farmers-general; for such there were. To Procope, the founder, succeeded Coltelli, who assumed the former name…

There is rivalry at the Cafe de Procope with the Cafe' de la Kegenoe as to chess, and dominoes are in great vogue there—one tremendous match being recorded, which lasted two years, the players being M. Renard, the bookseller, and M. Dantzell, engraver to the Mint.

Amongst the special visitors of the Cafe Procope is a mysterious nameless personage, known as "The Teaman." Every night, precisely at the midnight hour, the Teaman mixes his own Souchong and Hyson, to the great admiration of surrounding coffee-drinkers, who, like most Frenchmen, look upou the beverage as a bitter, styptie, and disagreeable mixture.
All the Year Round edited by Charles Dickens Vol. 8 London:  Oct 25, 1862

"THE first café was opened in Paris by an Armenian named Pascal about forty years before the date of our story, and so quickly did these establishments increase, being greatly to the taste of the Parisians, that at the time of which we write there were more than three hundred [cafes] in existence, one of the best being the Café Procope, now [1864] known as the Café Zoppi, situated in the Rue SaintGermain des-Prés, exactly opposite the old Comédie [theater]. Besides the best coffee in Paris, a great deal of amusement could be had at the Café Procope, play being permitted in a back salon; while in the private cabinets delicious suppers were served, and partaken of by charming actresses from the Comédie, and fascinating filles de l'Opéra. Thus, for various reasons, the Café Procope ranked high amongst pleasant places of resort, and was much frequented by poets, actors, painters, men of business, men of learning, men of science, and men of pleasure.
Bentley's Miscellany  London: 1864  vol 55

In fact we were upon the threshold of the Cafe Procope,—now calm, silent, and stupid, like all the cafes in Paris. What a change! The large room is almost deserted; two disciples of Hippocrates are playing dominos with a more important air than if they were settling the destinies of an empire. Piled upon a table, lie unhonoured, all the newspapers of the week; poison and honey, bites and caresses, the slang of the markets and the most beautiful French language, art and taste mingled with scandal and calumny;—such is this work of light and darkness. It is a Pandemonium, the danger of which is passed at mid-day, for this single reason, that it will recommence to-morrow. And yet this calm spot, this deserted room, these tables, around which there is no longer any agitation, all this silence—is the cafe Procope, it is that spot in this immense city, where French causerie has exhibited its most lively impatience, its most dangerous zeal; all its briefs, all its paradoxes, all its scandals, all its resistance, all its opposition.

To the cafe Procope resorted, as to a common rendezvous of wit, eloquence, and vivacity, the men, who, in their play, have overthrown a religion and a monarchy; Voltaire, Piron, Diderot, d'Alembert, the Baron d'Holbach, the Baron de Grimm, the bold and intrepid Gilbert, J. B. Rousseau, who made himself hated for his hateful satires, and sometimes, J. J. Rousseau himself, when, overcoming his natural timidity, he dared to meet the rapture, wit, and raillery of these men.

There was so much noise you could not hear yourself speak, there were Utopias beyond all imagination. People talked of everything, and many things beside. The one party proclaimed liberty, equality, and natural rights; while their opponents violently defended established order, and repulsed with all their power the advancing revolution. Useless efforts! the revolution was to become the strongest, and to draw with it, all men, the conquered and the conquerors, the feeble and the strong, those who were in advance of the age, and those who were far behind it. Of all the intellect expended in the cafe Procope, of the eloquent, overflowing abundance of Diderot, within these four walls, what now remains? A glass of eau sucree, a marble table, and a game of dominos!