Chicken coops in the kitchen

"1 wire chicken coop" was listed in a July 1818 kitchen inventory of the Virginia Governor's mansion, in the center of Richmond (Gov. James Patton Preston).

Maryland Gov. Ridgely also had one in the 1829 inventory of his Baltimore City mansion, as did an Anne Arundel County, Md 1780 inventory.


Hen houses or poultry houses were larger structures in the chicken yards than coops. image 1878. More on chicken ramps and ladders HERE

The chicken yard sketch 1823 has chicks under a basket-cover coop and chickens are on a ramp to a hen house. 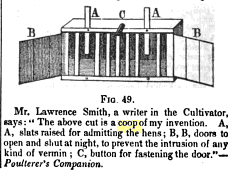 A sturdier version:  “Near the fire-side stands the landlady's bed, supported by a hen-coop full of little chickens.”  [Bray, Anna.  Letters written during a tour through Normandy… London: 1820]

Why use coops, or the kitchen
“Put them into coops, but so that they have a great deal of room; chickens and young turkies in the kitchen, being more in the way there; feed them with draff [damp remains of malt] or kitchen meal…” [Hudson, Mrs. The New Practice of Cookery.  Edinburgh: 1804]

“The most advantageous situation for the hen-house, is near some kitchen, brew house, or bake-house, where it may receive a distant warmth from the fire, and be scented with smoke, which to pullets is not only wholesome, but agreeable.”
[Henderson, William.  The Housekeeper's Instructor. 1805]

“Other places can be selected for sitting in, such as an outhouse, a loft, a spare room in the farm-house, or even the back-kitchen.”   [Stephens, Henry.  The Book of the farm.  NY:1852]