Food prices were lower in Federal America than Regency England 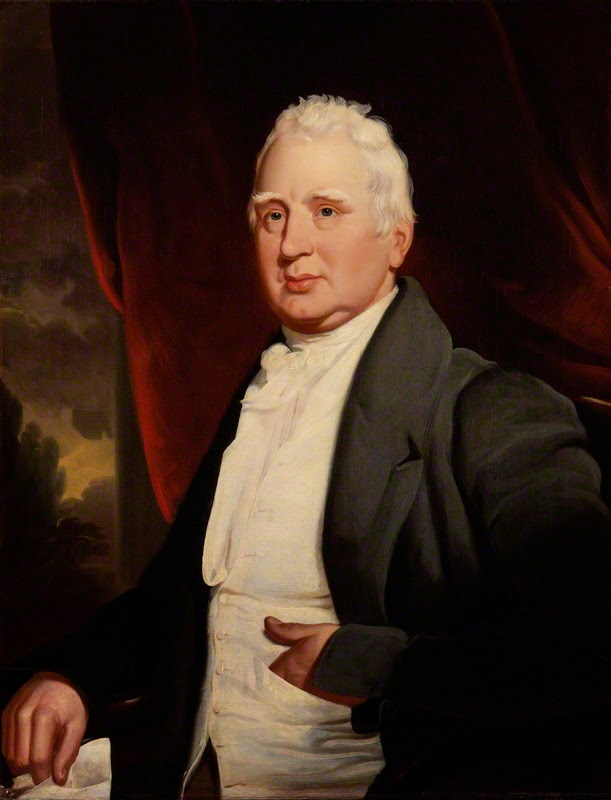 In 1818 Cobbett listed the many “groceries” the Americans paid half or even a third the price that the British paid.  Furthermore, everyone was able to partake of chocolate “which is a treat to the rich in England.”  The British people paid to keep the Indies, and yet, “What a hellish oppression must that people [Americans] live under!”

William Cobbett  (1763-1835) was a British writer, parliamentarian and reformer  who wrote many works including Cottage Economy (1822) with recipes and farming instructions.  Excerpts are from his A Year's Residence, in the United States of America, 1818 -

"Groceries, as they are called, are, upon an average, at far less than half the English price. Tea, sugar, coffee, spices, chocolate, cocoa, salt, sweet oil; all free of the Boroughmongers' taxes and their pawn, are so cheap as to be within the reach of every one. Chocolate, which is a treat to the rich, in England, is here used even by the negroes. Sweet oil, raisins, currants; all the things from the Levant, are at a fourth or fifth of the English price.

The English people, who pay enormously to keep possession of the East and West Indies, purchase the produce even of the English possessions at a price double of that which the Americans give for that very produce! What a hellish oppression must that people live under!


The price of wheaten bread is a third lower than it is in any part of England. The price of beef, mutton, lamb, veal, small pork, hog-meat, poultry, is one half the London price; the first as good, the two next very nearly as good, and all the rest far, very far, better than in London. The sheep and lambs that I now kill for my house are as fat as any that I ever saw in all my life; and they have been running in wild ground, wholly uncultivated for many years, all the summer…   What they have fattened on except brambles and cedars, I am sure I do not know. If any Englishman should be afraid that he will find no roast-beef here, it may be sufficient to tell him, that an ox was killed, last winter, at Philadelphia, the quarters of which weighed two thousand, two hundred, and some odd pounds, and he was sold TO THE BUTCHER for one thousand three hundred dollars.

An idea of the state of plenty may be formed from these facts: nobody but the free negroes who have families ever think of eating a sheep's head and pluck. It is seldom that oxen’s heads are used at home, or sold, and never in the country. In the course of the year hundreds of calves' heads, large bits and whole joints of meat, are left on the shambles, at New York, for any body to take away that will. They generally fall to the share of the street hogs… [Past blog post with further information and images of free range pigs in NYC: HERE]  If it were not for the superabundance, all the food would be sold at some price or other.

After bread, flesh, fish, fowl, butter, cheese and groceries, comes fruit. Apples, pears, cherries, peaches at a tenth part of the English price…Besides these, strawberries grow wild in abundance; but no one will take the trouble to get them. Huckle-berries in the woods in great abundance, chesnuts all over the country. Four pence half-penny (English) a quart for these latter. Cranberries, the finest fruit for tarts that ever grew, are bought for about a dollar a bushel, and they will keep, flung down in the corner of a room, for five months in the year. As a sauce to venison or mutton, they are as good as currant jelly. Pine apples in abundance, for several months in the year, at an average of an English shilling each. Melons at an average of an English eight pence. In short, what is there not in the way of fruit? All excellent of their kinds and all for a mere trifle, compared to what they cost in England.


I am afraid to speak of drink… those, who are not content with the cow for vintner and brewer, that all the materials for making people drunk, or muddle headed, are much cheaper here than in England. Beer, good ale, I mean, a great deal better than the common publichouse beer in England; in short, good, strong, clear ale, is, at New York, eight dollars a barrel; that is, about fourteen English pence a gallon. Brew yourself, in the country, and it is about seven English pence a gallon; that is to say, less than two pence a quart. No Boroughmongers' tax on malt, hops, or beer! Portugal wine is about half the price that it is in England. French wine a sixth part of the English price. Brandy and Rum about the same in proportion; and the common spirits of the country are about three shillings and sixpence (English) a gallon. Come on, then, if you love toping; for here you may drink yourselves blind at the price of sixpence."


A Year's Residence, in the United States of America By William Cobbett.  London: 1818