Egg shells filled with scented rose-water were to be thrown by the ladies during banquets... after the cannons were fired on board pastry boats... to cover the smoke smell.  Then live birds and frogs came out of the pies.  Robert May described how to make these and other incredible dishes in his The Accomplisht Cook, 1685. ...


Although the following "Triumphs and Trophies in Cookery, to be used at Festival Times, as Twelfth-day, &c." is for Twelfth Night or other special occasions, the tricky treats are good read for April Fools Day. Last year's Fools recipes, starting in 1675 are HERE

"MAke the likeness of a Ship in Paste-board, with Flags and Streamers, the Guns belonging to it of Kickses, [Kexes - hollow stems of plants] bind them about with pack-thread, and cover them with close paste [pie crust] proportionable to the fashion of a Cannon with Carriages [base with wheels], lay them in places convenient as you see them in Ships of war, with such holes and trains [lines] of powder that they may all take [able to] Fire; Place your Ship firm in the great Charger [serving platter]; then make a [pour] salt round about it, and stick therein

egg-shells full of sweet water, you may by a great Pin take all the meat [yolk and whites] out of the egg by blowing, and then fill it up with the rose-water, then in another Charger have the proportion of a

Stag [male deer] made of course paste, with a broad Arrow in the side of him, and his body filled up with claret-wine; in another Charger at the end of the Stag have the proportion of a

Castle with Battlements [walls along top with gaps], Portcullices [grate to block entrance], Gates and Draw-Bridges made of Past-board, the Guns and Kickses, and covered with course paste as the former; place it at a distance from the ship to fire at each other. The Stag being placed betwixt them with egg shells full of sweet water (as before) placed in salt. At each side of the Charger wherein is the Stag, place a

Pye [Pie] made of course paste, in one of which let there be some live Frogs, in each other [the 2d pie] some live Birds; make these Pyes of course Paste filled with bran, and yellowed over with saffron or the yolks of eggs, guild [with gold] them over in spots, as also the Stag, the Ship, and Castle; bake them, and place them with guilt bay-leaves on turrets and tunnels of the Castle and Pyes; being baked, make a hole in the bottom of your pyes, take out the bran, put in your Frogs, and Birds, and close up the holes with the same course paste, then cut the Lids neatly up; To be taken off the Tunnels; being all placed in order upon the Table,

before you fire the trains of powder, order it so that some of the Ladies may be perswaded to pluck the Arrow out of the Stag, then will the Claret-wine follow, as blood that runneth out of a wound. This being done with admiration to the beholders, after some short pause, fire the train of the Castle, that the pieces all of one side may go off, then fire the Trains [lines], of one side of the Ship as in a battle [battle]; next turn the Chargers; and by degrees fire the trains of each other side as before. This done to sweeten the stink of powder, let the Ladies take the egg-shells full of sweet waters and throw them at each other. 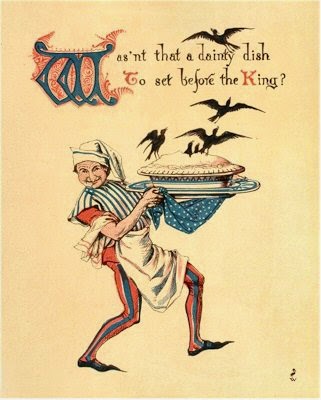 All dangers being seemingly over, by this time you may suppose they will desire to see what is in the pyes; where lifting first the lid off one pye, out skip some Frogs, which make the Ladies to skip and shreek; next after the other pye, whence come out the Birds, who by a natural instinct flying in the light, will put out the Candles; so that what with the flying Birds and skipping Frogs, the one above, the other beneath, will cause much delight and pleasure to the whole company:

at length the Candles are lighted, and a banquet brought in, the Musick sounds, and every one with much delight and content rehearses their actions in the former passages. These were formerly the delight of the Nobility, before good House-keeping had left England, and the Sword really acted that which was only counterfeited in such honest and laudable Exercises as these."     The Accomplisht Cook by Robert May.  1685

“Kex or kexes are, at least in Derbyshire, the dry stalks of all hollow-growing plants.”  Notes and Queries.  London: May 25, 1878