Continuing with Dutch, Flemish and French butter in paintings from the 17th, 18th and 19th centuries.

The butter in a mound shape is from Pieter de Hooch's A Woman Preparing Bread, (Dutch c1660) in the Getty Museum.

Mound of Butter by Antoine Vollon (French, c1875) in the National Gallery of Art. 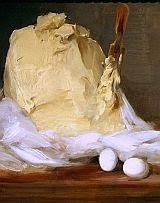 A mound of butter in the shape of a cone in a painting by Jean-Etienne Liotard (French, d1789). For the entire painting click HERE

A pile of slices of butter and butter spread on bread in Still life with Bread by Floris van Schooten (Dutch, d1655).  private

Butter curls or slices with cheese and bread in Still Life with Ham by van Schooten (Dutch, d1655) Kroller-Muller Museum.

﻿
Butter or Cheese? What do you think?

After my first post on 17th century Dutch and Flemish butter in art, HERE someone commented that it was cheese.

The lady with the imprinted shapes, by the French engraver Nicolas Larmessin (d1694), is called la Beuriere – and Beurre is French for butter. Peter Rose, who has studied Dutch paintings and cooking for decades and is the authority, kindly responded to my email and said they were butter.

In a couple of the paintings butter is next to pancakes and waffles, which then as now were eaten together. Butter was printed with various designs to distinguish the seller or for decorative purposes, and was made in different shapes. While I have made butter for many years, I have only made a few types of cheese and can’t imagine any of those cheeses having a ‘print’ on every top. Or how they made the cheese with the two long end points. The texture, color and sheen of butter are different from cheese.

Butter packed in cloth (as seen with some in the first post) is also in a Lewis Miller image and in early writings. Thomas Moore’s 1803 refrigerator HERE held 22 one pound bricks of butter each wrapped in "linen cloths as usual."