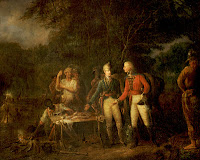 Placing sweet potatoes in or on coals from a fire is an easy way to cook them...and that is how they were cooked in the painting "General Marion Inviting a British Officer to Share His Meal."   The image was on the $10 bill of the Confederate States, and on a post war South Carolina $5 bill...


"General Marion Inviting a British Officer to Share His Meal" or the "Sweet Potato Dinner" painting depicts General Francis Marion (1732-1795), also known as "The Swamp Fox."  The artist was John Blake White (1781-1859) from SC, whose son donated the work to the US Senate in 1899.  According to the Senate website HERE  the White's farm was next to the Marion's, so when the artist was a boy he knew the General.

Although the artist portrayed an African American slave, Oscar Marion, cooking; a soldier, Samuel Weaver, was the actual cook.  The painting was done over forty years after Marion died by an artist who was born the year the meeting occurred - 1781.  Weaver, a soldier had included the event in his pension application.   Weaver's recollection (there was no table, but do look at it's interesting construction) is from the Senate website:

During the time he was with Gen'l Marion, a British Officer as he was told, came to Camp but for what reason he does not know; he was roasting and baking sweet potatoes on the coles –-Gen'l Marion steped up with the British Officer and remarked he believed he would take Breakfast; he felt proud of the request, puled out his potatoes, wiped the ashes off with a dirty handkerchief, placed them on a pine log (which was all the provision they had) and Gen'l Marion and the Brittish Officer partook of them. He had been told by some that this had been recorded in the log of the Gen'l as dinner but this was breakfast.

Sweet potatoes are easy to cook on the coals and are delicious.  The potatoes can be placed on the coals and turned occasionally, or they can be buried in the ashes and coals.
In 1840 John Sartain, (1808-1897) did an engraving from the painting. During the Civil War, in 1861, the image was on the $10 bill of the Confederate States, and on a post war South Carolina $5 bill.

Click on any of the images for a larger version.  The painting is from the Senate web page already cited, the currency is from  http://www.rebelstatescurrency.com/confederate.html
©2012 Patricia Bixler Reber
hearthcook.com
Posted by PBReber at 10:42 AM