Army officers supplied their own furniture for their tents -including tables for dining,  chairs, beds, dressers, desks, bookcases and occasionally a sofa.  The "campaign furniture" or "camp tables" varied in design and in quality. There were some marvelous ways to dismantle ("knock down") or fold the tables to make them compact enough to easily transport. Their portability and in many cases double use, made campaign furniture popular aboard ships, in smaller English homes (such as beds from sofas or chairs), for explorers and travelers.

The table with a long tablecloth in the British officer's tent (1780) probably had removable legs which were packed within the table tops or in boxes.

Furniture makers created a variety of furniture to replicate the comforts of home for the officers.  In addition to tables, the men could purchase numerous styles of chairs - even sofas - some folding out to make a bed; also desks, bookcases, and chests of drawers.

“In encampments, persons of the highest distinction are obliged to accommodate themselves to such temporary circumstances, which encampments are ever subject to. Hence every article of an absolutely necessary kind, must be made very portable, both for package, and that such utensils may not retard a rapid movement, either after or from the enemy.  …therefore, each of them [furniture] required to be folded in the most compact manner that can be devised; yet this is to be done in such a way as, that when they are opened out, they will answer their intended purpose.”

Sheraton described two types of camp tables.  The first table “… consists of two flaps …hinged at the under side.  The triangular legs which support it, are fixed in the centre, by means of an iron triangle, with three screw pins and nuts…so that when the legs of the table are put to their place… and pressing the centre, the legs are contracted inwards, consequently the flaps are kept up, and secured to the legs at the same time. These tables are both simple, and will bear any degree of hardship.

The trussel camp table ….top is one entire piece, 30 inches long by 20 broad; and being hinged at one side with swan neck hinges, [a kind of pin-hinge], the top easily turns over upon the trussel, and may be fastened with a hook and eye.”
﻿
Sheraton, Thomas.  The Cabinet Dictionary.  London: 1803

The British General Corwallis' table is now at the Yorktown Colonial National Historical Park.  The top is removed, then the legs folded upon themselves.

A British mess tent, 1778, with plainer tables and benches for the troops.  It may be like Sheraton's "trussel table" described above, or a trestle/sawbuck table as show in the Civil War and 15th cen. tables in the last section of this post.

George Washington ordered two camp chests for dining on May 3, 1776.  The one below is at the Smithsonian. 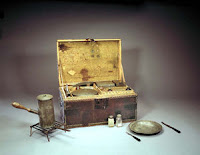 General Washington wrote to the Quartermaster, Col. Pickering, several times about wagons and horses to transport the tents and equipment of the officers and the troops:
"The allowance of Carriages for the transportation of the Baggage of the Officers of the Army as exhibited in your Estimate, appears to me, to be both reasonable, and adequate to the purpose… , it seems more necessary that the General Officers should be accommodated with Horse Teams than others, as they may frequently have occasion to make more expedition in their movements than other Officers; whereas the Baggage of the Officers of the Staff and the Line will rarely if ever be seperated from the column of Baggage, on a march…" [George Washington to Timothy Pickering, February 21, 1782- Library of Congress, also a quote on horses:]
“No Horses belonging to the United States shall be allowed to officers for Ridg. or Batt. Horses but in lieu thereof shall be paid in Spanish Milled Dollars...”

The sketch shows taking down the tents and loading the wagons during the Civil War.

President Lincoln visited General McClellan in 1861 and sat at one of the two tables in his tent.  The table on the left is under a flag, but the carved legs are visible.  The table on the right may possibly have removable legs (as seen above) or fold down (below). Metal/brass pieces are on the corners, and the top could become a 'box.' 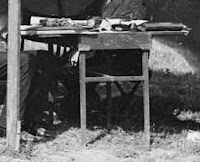 The table legs could have folded down as seen in this 1860 table: 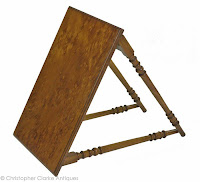 The officers are dining on a tablecloth covered table while sitting on benches and collapsible chairs. 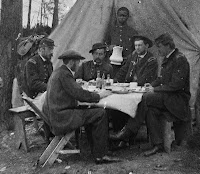 An interesting accordion style collapsible base, shown ready for transport in second photo next to soldier: 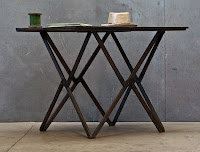 The legs of the table may have been removable and placed in the table top.
﻿ 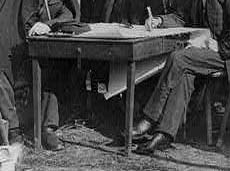 This table is an X style with a peg in the center and and one at the top of the legs.  The top pegs were taken out, the table top removed and the X legs folded into themselves.  A similar style, though much fancier, is the campaign table of Cornwallis. 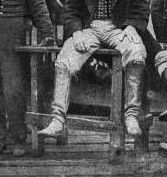 Sticks or tree trunk sections used to hold up a board or wood top: 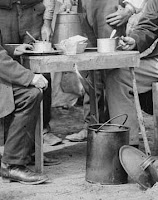 An interesting side-note on the table with the tree trunk base concerns three French princes - the son and grandsons of King Louis-Phillipe - who spent a year with General McClellan, and were photographed seated at Yorktown, May 1862. Francois d' Orleans, Prince of Joinville (b1818) a younger son of Louis-Philippe, and his two nephews: Prince Philippe d'Orléans, Comte de Paris (b1838, claimant to the throne) and his brother Prince Robert, Duc de Chartres (b1840) were honorary Captains.  The other photo shows some of the Prince of Joinville's servants. 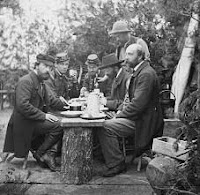 The rough table below is from a sketch made c1840 of a Revolutionary War scene with "The Swamp Fox". For the entire picture in a recent blog posting on the Sweet Potato Dinner, click HERE

A long table at a headquarters had a tablecloth and a water pitcher with glasses on the right.  It appears that saw-horses/sawbucks or trestles were used to support the table top or board in this sketch.  The next photographs show an even longer table top, laid on trestles, from 15th cen. Bruges, Brussels.

While most officers had room in their tents for a table, chair or stool...

some troops were not so lucky... 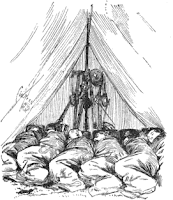 ...and would have to dine where they could... 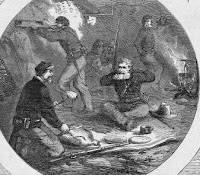 Sources for the images:
All the modern photos of tables with a white background are from Christopher Clarke Antiques at campaignfurniture.com.

The c1860 accordion collapsible-base table with the grey background is from Antiques and Oddities Factory.

The medieval table from Bruges photo is from HERE.

The photo of Gen. Cornwallis Camp table is from HERE

The Civil War images are from the Library of Congress online collection HERE.

The first print, “British Soldiers Drowning Care," 1794 is from the British Museum collection.

The tent containing the table with the long tablecloth is a small part of A Visit to the Camp, 1780.

"The Camp at Warley Common," 1778 by Paul and Thomas Sandby contains the mess tent with long tables and benches.  The second print of the soldier sitting in his tent is Paul Sandby's "Encampment at St. James' Park, London, 1780."

Loudon, John.  An Encyclopædia of Cottage, Farm, and Villa Architecture and Furniture ...  London: 1839