Fountains - engineering water from the 17th century, talk on April 19 ... but the relation to mills?

In 1774, Joseph Ellicott (1732-1780) designed a TEN foot fountain, which ran continuously, in his fish pond by his state-of-the-art mill and large home called Fountainvale near their new (1772-) town of Ellicott mills (now Ellicott City, Md). Years before he designed and made a phenominal four faced musical tall clock (now in the Smithsonian) and was elected into the selective American Philosophical Society in 1770. His eldest son is known for surveying DC and many states, two other sons became land agents and laid out towns and cities in western NY, and he was the great uncle of cookbook author Elizabeth Ellicott Lea (1845, first of 3 editions). 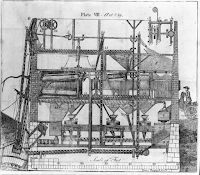 Oliver Evans (1755-1819) - were his patented mill designs his original creations? Talk next month taking his side, and here is one of the sources on the Ellicott side.

"Oliver Evans, who procured this patent from the Legislature of Maryland, [1787] had, previously to this event, been in the habit every year of passing several weeks with the hospitable proprietors of Ellicott’s Mills, and as their inventions were open to the inspection of every one, he made use of his opportunities to become fully acquainted with their operations. So soon as Ellicott & Co. became aware of what had taken place, they demanded an interview with Oliver Evans, charged him with treachery and concluded all intercourse with him. Averse to litigation from their pacific principles, [Quakers] they suffered his aggressions to pass without further notice, not supposing he would exact from any manufacturer the fine which the Legislature had granted on his behalf."

25 years later, after all the Ellicott founders had died -

"In this however they were deceived, for in 1812 or 1813, he actually sued them for using his inventions contrary to law, in the mills on the Patapsco, and those more recently erected by them on Gwynn’s Falls. As a means of defence they engaged the most able counsel. Of this trial, Evan T. Ellicott writes: “Oliver Evans was defeated in the courts, and was forced to rest his claim to a patent on the plea of combining the improvements of the Ellicotts, and receiving a patent on this ground, it became a source of great emolument to him.

The Ellicotts clearly demonstrated the claim of their fathers, to the inventions taken up by Oliver Evans as his own. Pinckney [Evan's lawyer] endeavored to prove that the right which the Ellicotts had possessed, and which he and his coadjutor could not deny had been fully established, had expired by the limitation given to such property; that their client [Evans] had combined these old inventions, and was justly entitled to payment for his exertions, a plea which strange as it may appear was admitted by the Court.

The Ellicott's lawyers countered that "it to have been the desire of the inventors of this now contested machinery, and also the wish of their sons and representatives, that their inventions should continue to be, as they in the first instance had designed they should be, a gratuity to the millers of their country."

The conduct of the jurors in this case was greatly censured by all except a few partisans. The verdict as before written was given in favor of Oliver Evans, who pursued with the utmost rigor of the law those who used the inventions, and became a large capitalist thereby."
Tyson, Martha Ellicott. A Brief Account of the Settlement of Ellicott's Mills. Baltimore, 1865

Old Wye Mill museum is hosting three talks. Wye Mill was started c1682 and is considered the oldest continuously operating grist mill in the US.

Wye Mills, a small village on the Eastern Shore of Maryland, also has the Wye Oak, the largest White Oak tree in the US, which was next to Orrell’s Beaten Biscuits (now closed). In 2006 I spent the morning at Orrell's and here is a picture of the ladies rolling the biscuits (they did not roll out and use biscuit cutter - the more typical fashion).

Ap 19 Tue 2-4:30 The Art and Engineering of Water in the 17th Century or 'How did they do that?’ from “Moghul water gardens and underlying them is a maze of pipes and a great deal of subtle and sometimes heroic engineering” to Versailles and Vaux-le-Vicomte to two in UK by Capability Brown. Steve Temple. Birkbeck Garden History Group £6 tape for week. HERE Excellent talk. Engineering processes clearly explained.


This post was quickly written tonight to replace the one on foraging, since I just found out about the Wye Mill series. I will have longer posts on the Ellicotts on my EC blog, and add more taped talks from the last two years on this post.

TX Barton Springs Mill. James Brown, miller. Barton Springs Mill is “bringing heritage grains back to Texas...Our mill is a Osttiroler from Austria, and it currently runs 10 hours a day, 7 days a week - 4 days for culinary and baking, and 3 for distilling and brewing.” Austin Organic Gardeners Oc 12 2020. Speaker after 26 min. TAPE HERE

UK A Miller and his Mill, The story of John Else and Warney Mill. (Darley Dale). Using the miller John Else’s papers to describe work “of the mill and its farm but also of the craftspeople and specialists who helped rebuild the mill [1860], and those who bought flour and other products from the mill.” Judy Cooper. Derbyshire Historic Buildings Trust Jun 8 2021 TAPE HERE

The World’s Earliest Dated Tide Mill. Ireland. “The mill was constructed in the years AD 619-621 to service the Early Medieval monastery at Nendrum located on a tidal island in Strangford Lough in Ireland.” Thomas McErlean. Brown University. Medievalists.net 2015 TAPE HERE

Restoring our Rivers – Removing Barriers to Fish Migration. “how these weirs, locks and other infrastructure affect fish migration along the River Severn - and what could happen if they were removed.” Barbel fish. Dr Catherine Gutmann Roberts. Bournemouth University UK Mar 2 2021HERE TAPES HERE