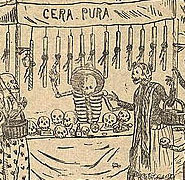 Sugar skulls were sold in market stalls (1908 image). Other items for the family alters include candles, Pan de Muerto (a sweet yeast bread), mole and other foods. Several upcoming virtual events are listed below. Some give history and make one of the items such as a sugar skull artist. Dia de Muertos is Nov 2 with activities beginning on Oct 31.

From 1919:
"Dia de Muertos " (All Souls' Day) is greatly observed in Mexico City by persons visiting the cemeteries and decorating the graves of departed relatives or friends with beautiful wreaths and flowers. The resting-places of the dead are crowded, all the tramways that lead to the different cemeteries are full of passengers all day long, coming and going.

During the day preceding and the day after, as well as "Dia de Muertos," booths are erected, sometimes near the Zocalo or Alameda, where peculiar toys and sweet-meats are sold in shapes of skulls, tombs, etc., all of funereal aspect, but which strange to say do not frighten the children, who buy these queer toys and take home to play with them. A bread is also sold called "pan de muerto" (dead man's bread), made into these weird shapes.
Godoy, Mercedes. When I was a Girl in Mexico. Boston: 1919

Learn how to create your own historically accurate Dia de Muertos altar and its componants from a historian in Teotihuacan, Mexico. From its "Mesoamerican heritage, to weapon in political commentary in the mid-19th century" the history of the colorful celebration will be told in old images and photographs. Impact Travel Collective (a worthy group focused on following the UN Sustainable Developement Goals) 'tour'/virtual talk will be held twice this week -Oct 28 and Nov 1. I just took their virtual tour and wonderful ppt talk on Teotihuacan, corn and chocolate. Amazing Post-tour information package.

Food for the Ancestors is a documentary made in 1999 by Professor Jan Thompson and Dr. Bruce Kraig. It was shown on PBS, where it still can be seen, as well as schools over the years. Thompson will talk about the making of the film, the food and heritage. Clips of the film and recipes will be sent prior to the Zoom on Sunday, Nov. 1 at 3pm.