Thomas Jefferson was serving in Paris when his personal secretary William Short sent him a letter with the following information about "the preservation of snow" in Italy... also, Short found a macaroni machine for Jefferson. HERE

William Short to Jefferson. Rome Feby 11. 1789:
"We were able to get but little information respecting the preservation of snow, except what we learned from our Valet de place. He persuaded us there was nothing different in it from the preservation of ice.

The magazines of snow are in the mountains of Sorento at a considerable distance from Naples across the bay. It is there kept in caves dug into the mountains for that purpose and from thence transported to Naples in small quantities as it is wanted.

Here it is put in common cellars on a kind of mat made of straw such as are used in Naples to be put on the floors of taverns instead of carpets. They resemble somewhat the mats we make of corn shucks for the floors in time of snow or bad weather." 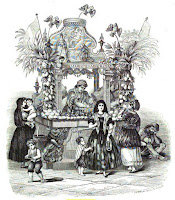 1783
“…there are stalls in all the thoroughfares, where lemonade and iced water are sold. The passion for iced water is so great and so general at Naples, that none but mere beggars will drink it in its natural state; and, I believe, a scarcity of bread would not be more severely felt than a failure of snow. It is brought in boats every morning from the mountains behind Castlelamare, and is farmed out at a great rent; the Jesuits, who possessed a large capital, as well as the true spirit of enterprize, had purchased the exclusive privilege of supplying the city with it.”  [Swinburne, 1783]

1797
Iced milk, fruits, chocolate, and other viands, are found in most of the towns. They do not, as with us, use ice as a cooler, but snow; which is not only more easily preserved, than ice, but it is supposed by them to be more healthy. That snow is more easily preserved appears evident; as, in warm summers, our ice houses are frequently deficient: - whereas there is no scarcity of snow in the hot summers of the South.

It is preserved partly in natural cliffs of the rocks, and partly in caverns; which they dig in the mountains toward the north. In these the snow is closely packed together; and, to give it a durable consistency mixed with straw, sand, or, in volcanic countries, with ashes.

The municipal magistrates are careful to make a sufficient provision of snow; and would be in danger, from the anger of the people, if a want of this necessary should be felt. The Government of Naples takes upon itself to provide for the city; and grants a man the privilege, by contract, of furnishing four hundred thousand inhabitants with snow.

It is preserved in the cliffs and caverns of the mountain San Angelo: between Castell-a-Mare and Sorento. Snow is brought every night to the shore on the backs of asses; and porters are then loaded with it, by whom the city is provided for the following day. The Neapolitans would murmur as loudly, were they without snow for a single day, as our soldiers, when in camp, if they could procure neither brandy nor tobacco. The contractor is subjected to a fine of two hundred ducats, for every day on which the city is not sufficiently supplied with snow.

Landolina has led me to remark the customary use of snow among the ancients. … Athenæus cites a passage from Chares, who wrote the History of Alexander the Great: from which we see that Alexander caused snow to be preserved, much in the same manner that it now is in Italy and Sicily. At the siege of an Indian town, he ordered thirty trenches to be dug near each ..other, filled with snow, and covered with oak boughs: because, said Chares, the snow in this manner was the longer preserved.   [Several pages on ancients using snow HERE  Stolberg, 1797]

1828
"On [the Mountain of San] S. Angelo are the Repositories for Ice, or, properly speaking, Frozen Snow, which supply Naples and its environs with this indispensable luxury."  The price of “clean ice, or, properly speaking frozen snow to mix with wine, two grains – and snow for icing liquors one grain and a half the rotolo” [Starke 1828, 1837]

1867
Naples  “the orangeade and lemonade mixed with snow, and sold at the little booths on the street-corners. ... it was the profound theory of the Bourbon kings of Naples, that, if they kept their subjects well supplied with snow to cool their drink, there was no fear of revolution.” [Howells, 1867]