While in France, Jefferson ordered William Short (who was for a time his personal secretary) to buy a macaroni (Jefferson spelled it maccaroni) machine from Naples which eventually was shipped to America.  Their correspondence and Jefferson's drawings are below.  Click to enlarge 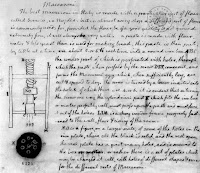 Jefferson to William Short
[before 17 Sep. 1788]
The essential part of a Maccaroni machine, is 1. an iron mortar with the bottom out, except as to a little annulur or margin thus 2. a round peice of metal which drops into this mortar, and is supported on the margin at bottom, as on a shoulder.

This iron is thus formed where all the black is solid.

The white represents the apertures through which the Maccaroni are forced by a screw. I would wish to have one of these irons the smallest (as to diameter) that is ever used, but with holes for Maccaroni of the common size. I have no occasion for the mortar, because we can easily make that: only I should wish to know it’s depth, and the breadth of the margin left in the bottom of it.
----
William Short to Jefferson
Rome Feby 11. 1789
Dear Sir
I procured at Naples according to your request the mould for making maccaroni. It is of a smaller diameter than is used in the manufactories of Maccaroni, but of the same diameter with others that had been sent to gentlemen in other countries. I went to see the maccaroni made. The machinery for pressing as used at Naples is enormous, much more so than I had expected. The price they told me for fitting up one of these machines with the mortar &c. was the value of 100. louis d’ors. The depth of the mortar is about twenty or twenty-four inches. The widthe of the margin that you desired to know is marked on the mould you will recieve. It was left with my banker at Naples to be forwarded to Mr. Catalan with a letter from me desiring him to recieve it and give you notice of its reception. I observed that the maccaroni most esteemed at Naples was smaller than that we generally see at Paris. This is the part of Italy the most famous for the excellence of that article. We had one of the best cooks in Naples and yet he never could give us maccaroni that we thought eatable. It was always far inferior to what we had seen in Paris and in some parts of Italy.
---

The best Maccaroni in Italy is made with a particular sort of flour called Semola, in Naples: but in almost every shop a different sort of flour is commonly used; for, provided the flour be of a good quality, and not ground extremely fine, it will always do very well. A paste is made with flour, water and less yeast than is used for making bread. This paste is then put, by little at a time, viz. about 5. or 6. lb. each time into a round iron box ABC, the under part of which is perforated with holes, through which the paste, when pressed by the screw DEF, comes out, and forms the Maccaroni g.g.g. which, when sufficiently long, are cut and spread to dry. The screw is turned by a lever inserted into the hole K, of which there are 4. or 6. It is evident that on turning the screw one way, the cylindrical part F. which fits the iron box or mortar perfectly well, must press upon the paste and must force it out of the holes. LLM. is a strong wooden frame, properly fastened to the wall, floor and cieling of the room.

N.O. is a figure, on a larger scale, of some of the holes in the iron plate, where all the black is solid, and the rest open. The real plate has a great many holes, and is screwed to the box or mortar: or rather there is a set of plates which may be changed at will, with holes of different shapes and sizes for the different sorts of Maccaroni.
After Feb 1789
----- 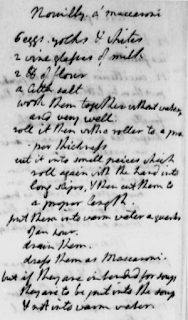 Nouilly a'maccaroni
6 eggs. yolks & whites.
2 wine glasses of milk
2 lb of flour
a little salt
work them together without water, and very well.
roll it then with a roller to a paper thickness
cut it into small peices which roll again with the hand into long slips, & then cut them to a proper length.
put them into warm water a quarter of an hour.
drain them.
dress them as maccaroni.
but if they are intended for soups they are to be put in the soup & not into warm water