How great would it be to own a c200 year old Rumford Roaster!  This Rumford Roaster, made by Elijah Fuller of Salem, was originally in an 18th century house in Peabody MA, and was working into the late 20th century; the home was demolished and the oven was saved and installed in a new house. Again removed and stored, the current owner contacted me and hopes it will be used and appreciated once again.

In addition to the Rumford Roaster oven, there is a firebox, ash-box, exhaust pipe, damper and four other iron pieces which are normally not seen out of the brick wall, so they would make a unique display, or support a working Rumford.

Although I have not acted as an intermediary for a sale on this blog, finding a home or site for one of my Federal/Georgian cooking apparatus - Rumford, Reip and other metal ovens, steam kitchens, etc. - is important enough to make an exception.  Contact info at end of post.   click on images to enlarge 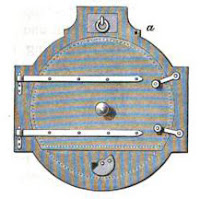 Count Rumford, Benjamin Thompson (1753-1814) was born in Woburn MA and led a... complicated life.  He fought with the British during the Revolutionary War, moved to Britain then to Bavaria where rewarded as Count, then France and England. He wrote extensively on his studies of heat, inventions and a variety of topics. Rumford did not patent his roasters (later style, sketch above), making his fuel saving roasters more readily available. More for a future post. There were at least three businesses in New England which made Rumford Roasters, according to those I have seen, thus far, in museums and homes in the region.

His brick home was at 20 Andrew St. (F in center of 1851 image) between Salem Commons and Collins' Cove (to the right of Essex Rail Road).  "Loammi Coburn ["master mason"] built the brick house, which was afterwards Elijah Fuller's." [Browne]

In the following picture, the oven door (left side) is open, with the hole for the exhaust pipe for steam at upper right.  The length is 29 1/2" and the interior diameter is 17" with front rim 21 1/2" in diameter.

bottom of the oven

back of the oven, shelf is lifted up

How it worked
The fuel is burned in the fire box below the oven (door open) to keep the metal oven constantly heated, and the ashes fall through a grate into the lower box (ash pit).

The Gardner-Pingree House museum in Salem, MA has a Fuller #84.   The "Roaster" (photo) had two heating "blowpipes" on the bottom.  The "Roasting-oven" (Rumford's term) had no pipes along the bottom, which is this oven #128.  The #127 oven, stored in an attic, has two pipes.  So Fuller may have had the two models for sale at the same time.

Rumford's instructions to install and use the roaster in the Complete Works of Count Rumford v3 Boston: American Academy of Arts and Sciences, 1874. p167-   HERE
Hard copy: Collected Works of Count Rumford ed by Sanborn C. Brown. v3.  Cambridge: Harvard University Press, 1969  with index.  (my copy, there may be other printings)

The Eppes, Derby, Endicott, Osborne House at 13 Andover Street in Danvers (now Peabody) MA was the original location of this Rumford Roaster. Elias Hasket Derby (1739-1799, the second owner) included a "Set Rumford Apparatus complete" in his 1799 mansion in Salem which was torn down in 1815 and the Rumford set was sold at auction.

"Kendall Osborn" (4th owner) house outline is below X on c1852 map; left side of road by rows of trees.

Contact
If you are interested in this Rumford Roaster email me at    patreber@hearthcook.com   and I will forward your email to the owner. I do not know the price, nor will I get any money from whatever is decided. I haven't seen the equipment, but the owner is the son of the previous owner and has seen it in action.

Reip oven and roaster.  Over the past few years 3 different contractors have contacted me about a Reip oven they were asked to remove. I have always told them to give it to the Smithsonian or Maryland Historical Society, but I wonder what happened to the ovens. Not around anymore, I'd guess. So now I will keep a list of people, museums, etc. interested in a Reip, or other regional ovens... so email me.  I do have period instructions how to easily remove the oven; and instructions for masons to brick around the oven and boxes, then flue to chimney. Henry Reip of Baltimore obtained a patent for a Bake Oven and Roaster in 1825 and later Alfred Reip competed with his father selling the oven with only slight changes.   Reip photos and info HERE


Displays
The Count Rumford Birthplace (Benjamin Thompson House) in Woburn MA, set up a partial brick wall to hold the mock-up of a roaster, firebox and ash-pit. An original oven was put on a stand.

An original Reip oven (it was oval) is on a stand but does not have the fire and ash boxes - which would make it easier to understand how it was heated.  The stand is at the Homewood Museum of Johns Hopkins University, Baltimore MD.