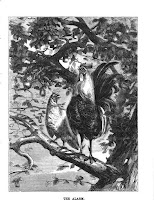 While going through old pictures of my great grandparents and their farm, I saw a chicken ladder in the background.   It was on a railing next to the corn crib and led up into one of the trees in the orchard. His parents had immigrated from Germany around 1870, met and married a few years later. So they undoubtedly had a chicken ladder or had seen them used in Germany. It may have been put up in the heat of the summer so the chickens could go into the cooler trees.  Or year round as described in one of the excerpts below from books or magazines. 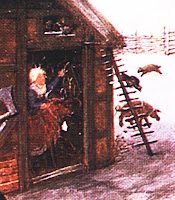 Some authors observed that chickens would naturally roost in trees, if available, and be healthier.  Due to the “natural insectiferous propensities of the chicken” - chickens eat insects - they were ideal when roosting in a fruit tree or orchard. [Wright; Farmers’]

In 1743 William Ellis objected because the fowl-dung was lost as fertilizer, but another British author in the 19th century observed that “the droppings from the birds [chickens] cause the mulberry to bear the largest berries I ever saw on a tree of the kind.” He did note the objections that frost could blacken the spikes and tops of the comb. [Wright]


Predators such as birds of prey, foxes, even coyotes that cannot climb (story at end of post) could kill many chickens roosting in trees.  “Horned Owl.  This bird catches its prey on the wing, and when visiting the old-fashioned hen roost where the chickens roost in the apple, peach and plum trees, it could not strike the chicken while flying on account of the limbs, but would light in the tree and sidle up to a hen and crowd her off the limb and as she fell or flew would catch her.” [Pioneer 1907]

Some authors stated that the chickens had to be inside “to get eggs during the winter season...” Wright  observed the reverse: “In the winter of 1871-2 fifteen Spanish pullets, with several cockerels, roosted in a very high hazel pear tree, and certainly in the most exposed part of the orchard—indeed, they were blown down by the storms several times during winter—yet they laid more eggs from the first of November to the fifteenth of February than the same number of Brahma and Cochin pullets….” [Successful; Wright]

Excerpts
“Most farmers think Turkeys, Geese, Ducks and Chickens are things entirely beneath their notice.... It is true the poultry come more particularly to the care of the good Housewife…If the poultry be suffered to roost out in the tree-tops winter and summer, and made to scratch for a living the best way they can, it could scarcely be expected they should prove thrifty and profitable. Vermin and inclement weather would blight expectations; … and other lands of a heavy wet nature where chickens will not thrive. Generally a light sand or gravelly soil is preferable; on the sea-board immense numbers are yearly raised. The shell-fish called Horse-feet, as well as many other kinds, are used for their food and are particularly fine for young chickens, but certainly do not improve the flavor of their flesh, as a blind man would probably think he was eating fish; but they find a ready sale in our numerous large city markets, and generally prove a very profitable branch of a small farm conveniently situated for such markets…”
Cottage Comforts: The Complete Directory for Rearing Fowls… NY: 1838

“In these boxes and runs the hens are kept during the whole time they remain with the chickens, the broods being placed from fifteen to twenty yards apart, in a large orchard. Each brood is placed near a tree suitable for the chickens to perch in, and in which they do begin to perch for the night as soon as they are able to fly up to the branches; and if the branches of the tree are too high for them to fly up to while quite young, I place something for them to get upon so as to reach them. After they begin to perch in the trees, all fear of deaths from their ‘going light' or any other disease is over.

The difference between the fledging of even very small Spanish chicks that roost in trees, and those in the boxes or houses, is most remarkable. Of those roosting inside, some will not be clothed with feathers, except on the wings, at twelve weeks old, and even of those that are feathered at that age, many will be rotten-feathered, and others bare on the neck, and without tails; while those that have been roosting in trees, hatched at the same time, and the eggs from the same parents, will nearly every one be sound in feather and almost as well-feathered as a Hamburgh chick of the same age. Of the broods that roost in boxes, more than half the number (in some seasons whole broods) “go light’—i.e., become thin and pine away without any apparent cause— some even when half-grown. …

This disease of wasting away never happens with me to those chicks that roost in the trees; so finding this to be the case, as soon as the wing-feathers are sufficiently grown, if the chickens do not take to the trees to roost of their own accord, I generally lift them one by one out of the box on a fine calm night into the branches of the nearest tree; and unless it rains the night after they seldom require lifting up a second time, but are ready enough to go up of themselves. The chickens that roost out grow very quickly, and are allowed to roost in any tree they like; but a very large mulberry tree is preferred by them to any other. … I may add that the droppings from the birds cause the mulberry to bear the largest berries I ever saw on a tree of the kind.

In the winter of 1871-2 fifteen Spanish pullets, with several cockerels, roosted in a very high hazel pear tree, and certainly in the most exposed part of the orchard—indeed, they were blown down by the storms several times during winter—yet they laid more eggs from the first of November to the fifteenth of February than the same number of Brahma and Cochin pullets….

One of the objections to Spanish or any other chickens roosting in trees is, that ever after during life they preserve the inclination to roost out, especially if there be trees they can get into. Another objection to Spanish roosting in trees during winter is, that the frost, if very severe, will blacken the tips of the spikes and sometimes the higher part of the comb, especially of the cockerels; but it must be remembered that even a slight frost will do the same to those that have been shut up in a house, if they are let out early in the morning. …”
Wright, Lewis.  The Illustrated Book of Poultry...  London: 1880

“Ages ago, before domestication, chickens roosted in trees, and they still have a little of the wild nature. Did you ever notice when the curfew of the poultry-yard summons the chickens to their roosts that they usually go to bed on the branches of a tree if there is one nearby? Not long ago the writer of this watched a large flock of fine chickens near Corvallis "retire" for the night. The farmer had built good houses for the flock, but near the houses there was a giant oak tree decorated by nature with mistletoe, and one after another the hens flew into this tree, some hopping from one branch to another till they reached the top-most branches, higher than the highest barn on the farm. It was interesting to see the chickens nestle down under the mistletoe for the night while the roosts in the poultry houses were vacant.

In a state of nature fowls lay only during the breeding season, and it is necessary in order to get eggs during the winter season to surround the hen with conditions that are more or less artificial.”
Successful Poultry Journal.  Chicago: Oct 1912

"There is danger in allowing the fowls to roost out doors during the night. Aside from the risk of being caught by owls, minks, or other enemies, fowls allowed to roost on trees, etc., are apt to contract roup and other sickness from the fogs or rain. Give them a comfortable house, and they will not ask to stay out."
The Wisconsin Farmer  Aug 18, 1893

"Now everyone knows a coyote cannot climb a tree; they are of the dog family, but I will tell you how on one moonlight night, I saw one coyote get about 15 of my chickens. This foxy animal when he located the chickens roosting in the tree, simply got underneath the tree and looked up at the band of chickens roosting on the limbs. He seemed to be puzzled for awhile as to how he would start in to get at the chickens, but he finally solved the problem. This particular coyote took the end of tail in his mouth and circled the tree like a spinning wheel, keeping up the pace at a terrific pace, and it being a moonlight night almost as bright as day, the chickens in the trees, so says Venn, in a short time became dizzy and fell out of the branches, when Mr. Coyote would stop long enough to secure the chicken, after this was accomplished he would commence again to revolve around the tree, until he got every chicken down out of the tree.” Venn claims that the method adopted by the coyote, was so interesting that he sacrificed about fifteen chickens just to see the devil work out his scheme.”
Rural Californian.  May 1908