In the fall and winter, chestnuts were roasted in a “huge iron apparatus...cooking a bushel at a time" or on "charcoal-pans" on the street.  Images of French vendors.


"Chestnuts roasting on the open fire" - The Christmas Song (that is the true title), was written in 1945 but evokes an earlier time when roasted chestnuts were popular.  17th century authors Milton and Herrick mentioned "fired chestnuts" in their poems. 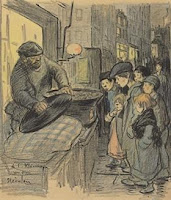 "The nuts must be first taken out of the outward green prickly husk, and the brown rind carefully pared off, so as totally to eradicate the sprout or growth." [Household] The brown rind is left on to roast but cut an X into it with a knife, "first slitting or cutting a notch in the skins, to prevent their flying off...placed on the fire in a pan with holes to roast. When done, serve them in dessert on a napkin, as hot as possible. Some boil the chestnuts instead of roasting them, as the skins are then cleaner, but the nuts not quite so mealy; the better way is to boil them in plenty of water, and when nearly done, take them out and roast them."  [Dolby]   I've done it in a cast iron pan on a trivet over the coals.

France 1866
"In France, considerable attention is paid to the preparation of the chestnut as an article of food, and no sooner do the cold, bleak winds of autumn and winter go sweeping through the broad thoroughfares of Paris, than whole flocks of the hirondelles d'hiver, or "winter swallows," as the roasted chestnuts are facetiously called by the Parisians, may be seen roasting on the charcoal-pans of their vendors, at every convenient corner."  [Nature]

Roasted Chestnuts in London 1851
"How long the street-trade in roasted chestnuts has been carried on I find no means of ascertaining precisely, but it is unquestionably one of the oldest of the public traffics. Before potato-cans were introduced, the sale of roasted chestnuts was far greater than it is now.

It is difficult to compute the number of roasted chestnut-sellers at present in the streets. It is probable that they outnumber 1,000, for I noticed that on a cold day almost every street fruit-seller, man or woman, had roasted chestnuts for sale. 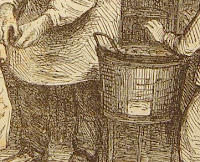 Sometimes the chestnuts are roasted in the streets, in a huge iron apparatus, made expressly for the purpose, and capable of cooking perhaps a bushel at a time—but these are to be found solely at the street-markets.

The ordinary street apparatus for roasting chestnuts is simple. A round pan with a few holes punched in it, costing 3d. or 4d. in a marine-store shop, has burning charcoal within it, and is surmounted by a second pan, or kind of lid, containing chest nuts, which are thus kept hot.

During my inquiry, chestnuts were dear. "People don't care," I was told, "whether chestnuts is [sic] three and six, as they are now, or one and six a peck, as I hope they will be afore long; they wants the same pennyworths."

Chestnuts are generally bought wholesale in Duke's-place, on the Sunday-mornings, for street sale; but some street-dealers buy them of those costermongers, whose means enable them "to lay in" a quantity. The retail customers are, for the most part, boys and girls, or a few laborers or street people. The usual price is sixteen a penny.

Roasted apples used to be vended in the' streets, and often along with roasted chestnuts, but it is a trade which has now almost entirely disappeared, and its disappearance is attributed to the prevalence of potato-cans."  [Mayhew]

Best chestnuts - "les marrow"
"Great attention is paid by the French to the selection of the particular kinds of nuts most esteemed for the table. The most notable of these is the kind known as les marrow, which are said to be to other chestnuts much what apples are to ordinary crabs. There are several other varieties less esteemed, but still important..." [Nature]

And black'ning chestnuts start and crackle there.