19th century dough for these highly spiced honey cakes (cookies) was "rested" for months to improve the flavor and texture.1553 recipe; 1698 & c1520 images

In fact, "small fortunes are invested in casks of dough, resting and ripening towards the season."  Bakers differed in size of storage containers, how covered (bladders shown in image below), and how to place in cool area such as cellar. A Harper's Weekly, 1889 story below, describes years of storage, with old bakers giving jars of dough as dowry.

The second stage of "blending and baking" the dough into cookies differed by bakers, and often was passed down in the family.

This image is from 1698 showing the carved boards.  Honey, sugar, flour, cinnamon, nutmeg, cloves, ginger and mace formed a 1553 recipe - 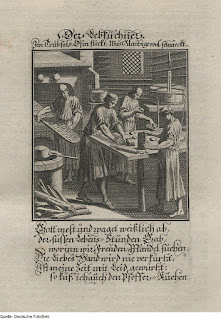 To make Nürnberger Lebkuchen by Sabina Welserin, 1553
Take one quart of honey, put it into a large pan, skim it well and let it boil a good while. Put one and a half pounds of sugar into it and stir it continually with a wooden spatula and let it cook for a while, as long as one cooks an egg, pour it hot into a quarter pound of flour, stir it around slowly and put the described spices in the dough, stir it around slowly and not too long; take one and a half ounces of cinnamon sticks, one and a half ounces of nutmeg, three fourths of an ounce of cloves, three ounces of ginger, a pinch of mace, and chop or grind each one separately so that they are not too small, the cinnamon sticks, especially, should be coarsely ground. And when you have put the spices in the dough, then let the dough set for as long as one needs to hard boil eggs.

Dip the hands in flour and take a small heap of dough, make balls out of it, weigh them so that one is as heavy as the others, roll them out with a rolling pin, and spread them out smoothly by hand, the smoother the prettier. After that dip the mold in rose water and open it up. Take four ounces of dough for one Lebkuchen. Be careful and get no flour in the molds or else they will be no good, but on the board you can put flour so that they do not stick to it. Let them set overnight. And when you take them to the baker, then see to it that you have another board that is thoroughly sprinkled with flour, so that it is very thickly covered. Put the board with its covering of flour into the oven so that the board is completely heated, the hotter the better. Take it out afterwards and lay the Lebkuchen on top, so that none touches the other, put them in the oven, let them bake and look after them frequently. At first they will become soft as fat. If you take hold of them you can feel it well. And when they become entirely dry, then take them out and turn the board around, so that the front part goes into the back of the oven. Let it remain a short while, then take it out. Take a small broom, brush the flour cleanly away from the underside of the Lebkuchen and lay the Lebkuchen, in the mean time, on the other board, until you have brushed off the Lebkuchen, one after the other, so that there is no more flour on the bottoms. Afterwards sweep the flour very cleanly from off the board. Lay the Lebkuchen on top of it again, so that the bottom is turned to the top. Take a bath sponge, dip it in rose water, squeeze it out again, wash the flour from the bottoms of the Lebkuchen. Be careful that you do not leave any water on the board, then they would stick to it. Afterwards put the board with the Lebkuchen again in the oven, until the bottoms rise nicely and become hard, then take the board out again. See to it that two or three [people] are by the board, who can quickly turn the Lebkuchen over, or else they will stick. Afterwards take rose water and wash them on top with it as you have done on the underside. Put them in the oven again, let them become dry, carry them home and move them around on the board, so that they do not stick. And when they have completely cooled, then lay them eight or ten, one upon the other, wrap them in paper and store them in a dry place, see that no draft comes therein, then they remain crisp. [Sabina Welserin, 1553]

"LEBKUCHEN, or Sweet Cakes, or Honey Cakes, a famous group of German cakes, composed of a great diversity of ingredients, the most important being flour, honey, sugar, spices, alcohol, almonds, citron, and orange peel. A characteristic feature of manufacture is that the dough is allowed to "rest" for a considerable time before baking, so as to permit a better amalgamation of the flavors and other properties of its components—many makers hold it in cool, dry places for several months before sending it to the ovens. The best known varieties are white lebkuchen, brown lebkuchen, Bremen pepper-cake, Thorner lebkuchen, Baseler lebkuchen, and Niirnberger lebkuchen. Both imported and domestic lebkuchen are sold here, the principal demand being during the winter holidays. A well-made product will remain fresh for a year or eighteen months, the honey content keeping it moist."  [Encyclopedia of Food. 1923]

"Whether the honey shall be brought to the boiling-point slowly or rapidly; whether it shall boil a long time or a short time; when and in what quantities the flour shall be added; how long the kneading shall last; in what size of earthen pot the dough shall be stored, and what manner of cover upon these pots best preserves the dough against the assaults of damp and mould; whether the pots shall be half-buried in the cool earth of the cellar or ranged on shelves to be freely exposed to the cool cellar air—all these several matters are enshrouded in a mystery that is penetrated only by the elect few of Nürnberg bakers by whom perfect lebkuchen is made. And the same is true of the Brunswick bakers, who call this rare compound honigkuchen, and of the makers of pferfferkuchen, as it is called by the bakers of Saxony.

Nor does the mystery end here. This first stage in the making of lebkuchen is but means to an end, and for the compassing of that end—the blending and the baking of the finished and perfect honey-cake—each master-baker has his own especial recipe, that has come down to him from some ancestral baker of rare parts, or that by his own inborn genius has been directly inspired. And so, whether the toothsome result be Nürnberger lebkuchen, or Brunsscheiger peppernotte, or Basler leckerly, the making of it is a mystery from first to last.  …

And when the dough was packed in earthen pots, over which bladders were tied, all the pots were set away in the coolest part of the cellar, as far from the great oven as possible, that the precious honey-cake might undergo that subtle change which only comes with time. …For at least a year must pass before the honeycake really can be said to be good at all; and the longer that it remains in the pots, even until five and-twenty years, the better does it become. Therefore it is that all makers of lebkuchen who aspire to become famous professors of the craft add each year to their stock of honey-cake, yet draw always from the oldest pots a time-soaked dough that ever grows more precious in its sweet excellence of age. Thus large sums—more hundreds of dollars than a young baker, just starting upon his farinaceous career, would dare to dream of—may be invested; and the old rich bakers who can dower their daughters with many honey-pots know that in the matter of sons-in-law they have but to pick and choose. "  [Harper’s Weekly, 1889]

"Here are the three principal doughs that enter into their manufacture, two are made months ahead of time, and considerable small fortunes are invested in casks of dough, resting and ripening towards the season.

NUREMBERG LEBKUCHEN
Boil up fifteen pounds of the best New Orleans molasses, skim it off once or twice, let it cool so that it can be easily mixed with the hands, add flour enough to make a dough that is not too stiff, yet that it will not run flat. Set aside in a firkin or jar for at least six weeks."  [National Baker 1912]