Huge macaroni machine in 1911 as compared with Jefferson's smaller version a hundred years before (below, more HERE ); from Artemas Ward's The Grocer's Encyclopedia. NY: 1911

Drying spaghetti and various other "pastes" in the open air—a scene in the vicinity of Naples, Italy 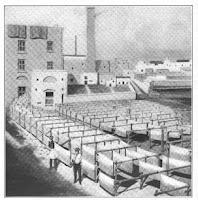 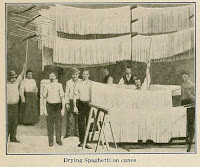 
The essential point in the manufacture of the pastes (excepting those of the Orient) is that the meal or "semolina" from which they are made be from hard, very glutenous wheat, the kind known as durum, or "macaroni," wheat in this country (see Semolina in the article on Farina and also reference in Wheat).


The semolina is moistened with the smallest possible quantity of boiling water, and thoroughly mixed (by machinery) until smooth and "tough." It is then worked up in a powerful machine kneader. The completed dough goes into the cylinder of a press, where tremendous pressure is brought to bear on it by means of revolving screws, and it is slowly passed out at the bottom of the cylinder through the small holes of the "trafila," as the perforated plate is called.


The form of the trafila fixes the character of the product. For macaroni and similar varieties, there is in each hole a steel pin which gives the "pipes" their hollow, or tubular, form. With smaller holes without pins, the trafila produces "solid" spaghetti and similar types. For flat, noodle-like, or "ribbon" varieties, a flat opening takes the place of the round styles, are sliced off by automatic rotary knives as the paste comes out of the trafila. The long varieties are cut off at the proper lengths by hand.

Next comes the drying—in Italy, generally accomplished by outdoor exposure; in this country, commonly in heated drying rooms, supplied (in the best conducted factories) with continually changing, washed, and filtered air. The long solid pastes may be looped over canes, or spread on frames; the others usually on frames only. When sufficiently dry, they are carefully inspected, sorted, weighed, and packed.


In Italy, colored pastes are popular in some parts—especially in Bologna. The most used tints are yellow, green, and red, produced respectively by the admixture of eggs, spinach juice, and beet juice.


The proportion of profit in paste manufacture depends to a considerable extent on the care in drying—on the vigilance exercised in ensuring an unvarying temperature of the proper degree. If the air is allowed to become too moist, the entire batch may be ruined by mildew or souring; if too hot, it may spoil by over-rapid drying and consequent cracking or damage to its texture; and if the room is draughty, loss by cracking is again the result.


The average American consumer has no idea of the number of forms, a hundred or more, into which the paste is shaped by Italian manufacturers. They range from lasagnes, short, flat pieces from one to two inches wide, cut out, and sometimes molded, by hand, to fidellini, long, thin threads, the finest of which are many times smaller than vermicelli, which is the finest generally known here…