Images from the 1600s through the 1800s look remarkably similar.  By 1774 “…the use of this sort of jack is common enough; but its construction and manner of acting being clearly understood by few..."   Detailed descriptions form period works - 1680, 1774, 1806, 1844 - follow a brief photo series. A later post will deal with the pros, cons and excerpts from period writing.


A smoke jack and case for the gears, on floor, Burghley House UK

The rod on the outer wall moves the upper wheels, which would have a chain to the wheel on the spit, Kew 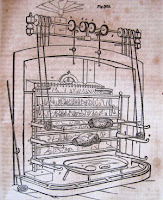 Mount Vernon, George Washington's home in Virginia, has a smoke jack whose chain loop goes straight down (rather than having the rod go through the wall) to one spit

In the 1485 German book Kuchenmeisterey, the fan is perpendicular- 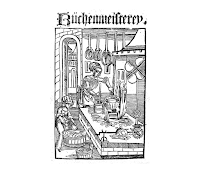 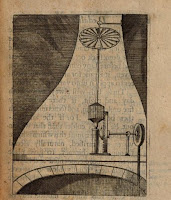 "Second Book.  Chap. I  The divers kind of Automata, or Self-movers.  Of Mills, and the contrivance of several motions by rarified air.

“But there is a better invention to this purpose mentioned in Cardan, whereby a spit may be turned (without the help of weights) by the motion of the air that ascends the chimney; and it may be useful for the roasting of many or great joynts: for as the fire must be increased according to the quantity of meat, so the force of the instrument will be augmented proportionably to the fire.  In which contrivance there are these conveniences above the Jacks of ordinary use.
The motion of these sails may likewise be serviceable for sundry other purposes, besides the turning of a spit; for the chiming of bells or other musical devices…  It may be useful also for the reeling of yarn, the rocking of a cradle, with divers the like domestick occasions.  …

These sails will always move both day and night, if there is but any fire under them, and sometimes though there be none.  For if the air without be much colder than that within the room, then must this which is more war and rarified, naturally ascend through the chimney, to give place unto the more condensed and heavy, which does usually blow in at every chink or cranny, as experience shews."

“…the use of this sort of jack is common enough; but its construction and manner of acting being clearly understood by few, we shall her describe them.

The horizontal wheel AB (Plate VII. Fig. 3) is placed in the narrowest part of the chimney that is next the fire: its wings, which are made of tin, are inclined to the horizon, that is, placed in a sloping direction. To the same axis on which A B turns, is likewise placed the cog-wheel C, that takes the teeth of the perpendicular wheel D. On the same axis with D, is placed the wooden wheel E, round which runs the rope F, on whose lower part is placed the wheel of the spit.

Now, the air, being rarefied by the fire, forces up the chimney, and meeting with the wings of the horizontal wheel in the narrowest part, necessarily turns it round, and at the same time turns the cog-wheel C, which turns D and E, together with the rope, which by its friction against the wheel of the spit, keeps that likewise constantly turning; and its velocity will be always in proportion to its weight, and the strength of the fire.

Therefore, if instead of the iron spit, the handle of the mill, be fixed in the center of the lower wooden wheel, it must, in like manner, turn that round; and the motion will continue not only while the fire lasts, but a considerable time after; for there will be a continual circulation of the air up the chimney, till that in the room becomes equally cold with the external air.

This machine may in like manner be applied to the reeling of yarn; to the making a hammer strike perpetually on an anvil; and many other domestic purposes.

"Smoke-jack is an engine used for the same purpose as the common jack; and is so called from its being moved by means of the smoke, or rarefied air, ascending the chimney, and striking against the sails of the horizontal wheel Ab (fig. 1), which being inclined to the horizon, is moved about the axis of the wheel, together with the pinion C, which carries the wheels D and E ; and E carries the chain V, which turns the spit. The wheel Ab should be placed in the narrow part of the chimney, where the motion of the smoke is swiftest, and where also the greatest part of it must strike upon the sails.—The force of this machine depends upon the draught of the chimney, and the strength of the fire." [1806] 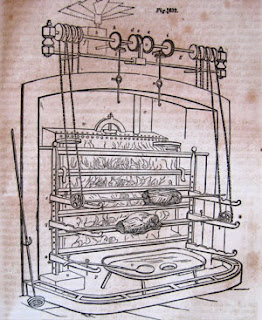 "the kitchen fire-place at the City of London Club House in Broadstreet [and Buckingham Palace]. Here there is one of the largest class of ranges, with a back boiler, and a smoke jack which turns six spits occasionally, a, the fan wheel of the smoke jack, in dotted lines, is behind the chimney breast in the flue of the chimney; b is a box enclosing two bevel wheels, one horizontal on the axis of the fan, and connected with another one vertical, the axis of which comes through the chimney breast, and has on it another vertical wheel, c, the latter turning two bevel wheels, d and e, which are fixed on the long axis, f g, that extends across the chimney, and which, of course, is made to revolve. On both ends of this axis is a grooved cylinder, in the grooves of which are chains to go down to the grooves of the wheels attached to the spits. In the wood-cut, two only of the chains are represented in action; the rest are only partly shown hanging down perpendicularly, to prevent crowding the figure. Besides these parts, there is on the same axis, g, two more bevel wheels, h and i, which turn two smaller ones, k and l, the axes of which are vertical, and have on them universal joints, m and n. These last are called by the cooks danglers, and their use is to turn, by means of another wire and hook, any smaller articles that may require to be roasted, and for which spitting may not he convenient : the motion of these, of course, will be vertical, as when meat hangs by a siring or bottle jack. The supports for the spits, o p, q, r, s, t, are not attached to the range, as in smaller ranges, but are inserted in two upright standards, which are: in masses of iron at the bottom, u, which can be moved farther out or nearer to the fire; the supports also, o, p, q, etc., can be raised or lowered. One end of the spit acts against an iron pin, and the other lies in a semicircular notch, s is the large dripping-pan wits its ladle for basting, baring a very long handle, to enable the cook to baste without being exposed to so fierce a heat as proceeds from this range, which is usually quite filled with a dense fire, w is a back boiler of wrought iron, from which a pipe, z, proceeds to carry hot water to the baths near the bedrooms in the upper stories, the boiler being supplied with cold water by another pipe from the high-service cistern. In the range are two winders for contracting the fire, but which in this place are never need, because the fire, being constantly wanted, is kept up till the evening, when it is suffered to go down, and is then smothered with the ashes. Coke alone is the fuel employed, which makes a very bright and hot fire. In some other large ranges, as that in Buckingham Palace, which is of the same construction, coke only is employed, requiring no renewal for the whole day."  [1844]